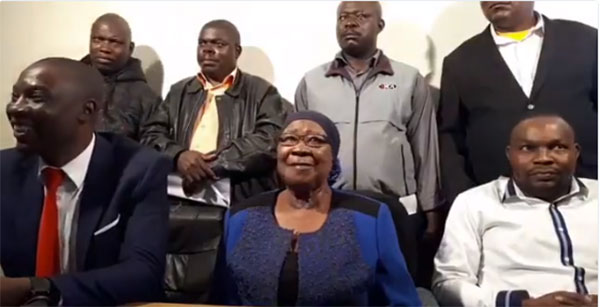 The Robert Mugabe endorsed National Patriotic Front (NPF) has fired its president Brigadier General (retired) Ambrose Mutinhiri. He was accused of setting up parallel structures and not attending party meetings. Eunice Sandi Moyo will be the interim president in the meanwhile. The expulsion follows the endorsement of Nelson Chamisa by the NPF at the MDC Alliance demonstration on Tuesday.

He does not attend meetings. We send him communication but he does not reply. Now we do not know whether he had come to destabilize us or what

The only positive thing that Mutinhiri did was to resign from Parliament and nothing else. He was actually putting parallel structures as he didn’t want to work with others. He has not been active in the party.

NPF spokesperson Jealousy Mawarire denied reports that Robert Mugabe and his wife Grace were members of the party. He insisted that they only offered advice to the party as the party’s leaders frequently consulted them.  The party said that it was in talks with Nelson Chamisa’s MDC-T to join the MDC Alliance. Said  Mawarire,

We are in talks for the coalition, the talks are at an advanced stage, we will make a joint press statement maybe early next week or even Saturday.

Mutinhiri’s days appear to have been numbered from the beginning as there were reports back in April that former first lady Grace Mugabe wanted him fired because she felt that he was not competent enough to challenge President Emmerson Mnangagwa or MDC-T President Nelson Chamisa.

This was followed by reports in May that former President Robbert Mugabe was planning to have Mutinhiri replaced by prominent lawyer Farai Mutamangira because he had failed to assert his authority within the party.

This is a developing story.  More Details will be added as they come in.