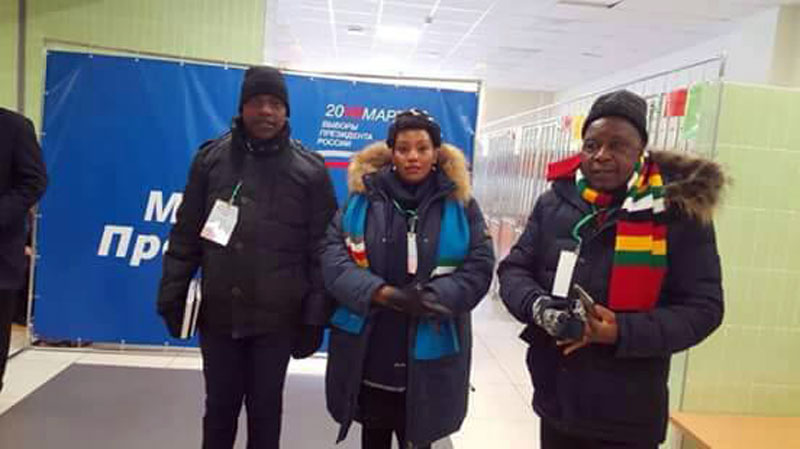 Speaking in Parliament after Chairperson of the Parliamentary Portfolio Committee on Justice Fortune Chasi’s presentation in response to a petition handed in by the Elections Resource Centre (ERC) in 2015, Harare West MP Jessie Majome (MDC-T) commented on reports ZEC chairperson Justice Chigumba had travelled to Russia with Christopher Mutsvangwa.

Majome said the reports raised concern over the Zimbabwe Electoral Commission (ZEC)’s independence considering the fact that Mutsvangwa is a member of Zanu-PF. Said Majome:

Today we have heard news reports of the ZEC chairperson – it is being said that she has accompanied a special advisor in the office of His Excellency the President to observe the Russian presidential elections where President Putin is campaigning as an independent candidate.  I want to exhort ZEC and Parliament should remind ZEC that the perceptions around its independence are very critical.  When the Chairperson of ZEC appears in Russia with the special advisor to the President who is clearly a member of a political party – there is a lot of talk right now on the social media; people are asking me what is going on, and are they really independent?  So, perception is extremely important.

Binga North MP Prince Dubeko Sibanda (MDC-T) added that even though people might want to downplay the issue it was of importance. Said Sibanda:

People may want to take it lightly but it is not light for us to see Justice Chigumba with Chris Mutsvangwa, a key player in the electoral field that we are getting into being together in Russia. One then would go ahead and say, was it just a picture that was taken once off or there were more dealings that were taking place thus compromising the electoral field in this country. Justice Chigumba’s appointment came immediately after “the new dispensation” and at a time when immediately after “the new dispensation”, the former ZEC Chairperson unceremoniously left her job. Not that we wanted her to remain there but we still have questions on how? Did she jump or she was pushed? That question has not been answered and it has not been dealt with. Therefore, when we see Justice Chigumba in Russia with Mutsvangwa, we believe that Justice Makarau was pushed and then Justice Chigumba was put in place in order to ensure that the electoral field is there to save a certain political party. We allowed our citizens to come up with those perceptions.