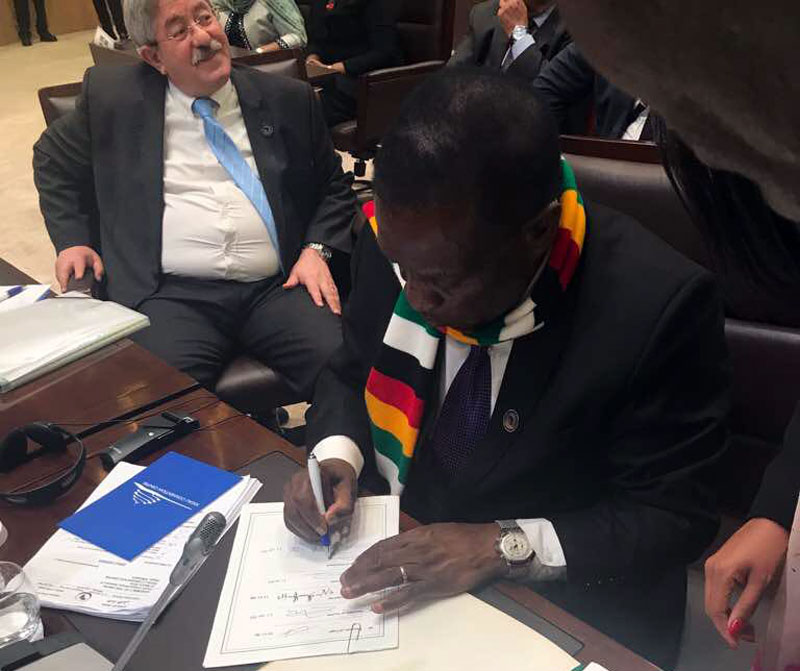 President Emmerson Mnangagwa signed the African Charter On Democracy, Elections and Governance on today (Wednesday) in Kigali, Rwanda where he was attending the African Union (AU) Extraordinary Summit which saw him also signing the agreement launching the African Continental Free Trade Area.

Zimbabwe will have to ratify and domesticate the African Charter On Democracy, Elections and Governance for it to be meaningful in the running of elections in Zimbabwe.

The African Charter on Democracy Elections and Governance (ACDEG) was adopted on 30 January 2007 as the African Union’s main normative instrument to set standards for better governance across the continent. It came into force in February 2012 after ratification by fifteen (15) States. As of September 2017, the Charter has been ratified by thirty (30) and signed by fortyfive (45) out of fifty-five (55) States.

The ADC is the first legal instrument adopted by member states of the AU that acknowledges that an unconstitutional change of government includes any amendments to the constitution or legal instruments of a member state that infringe on the principles of democratic change of government. Many African heads of state have amended the constitutions of their respective countries to retain power for example, Cameroonian President Paul Biya has been in power since 1982; because Cameroon’s constitution was amended to eliminate a two-term-presidential limit, permitting Biya to continue to run for re-election and remain in power. Similarly, Chadian President Idriss Déby was elected to a third presidential term after a constitutional referendum eliminated presidential limits and Ugandan President Yoweri Museveni was re-elected to a third term after the Ugandan constitution was amended in 2005 to abolish presidential term limits.