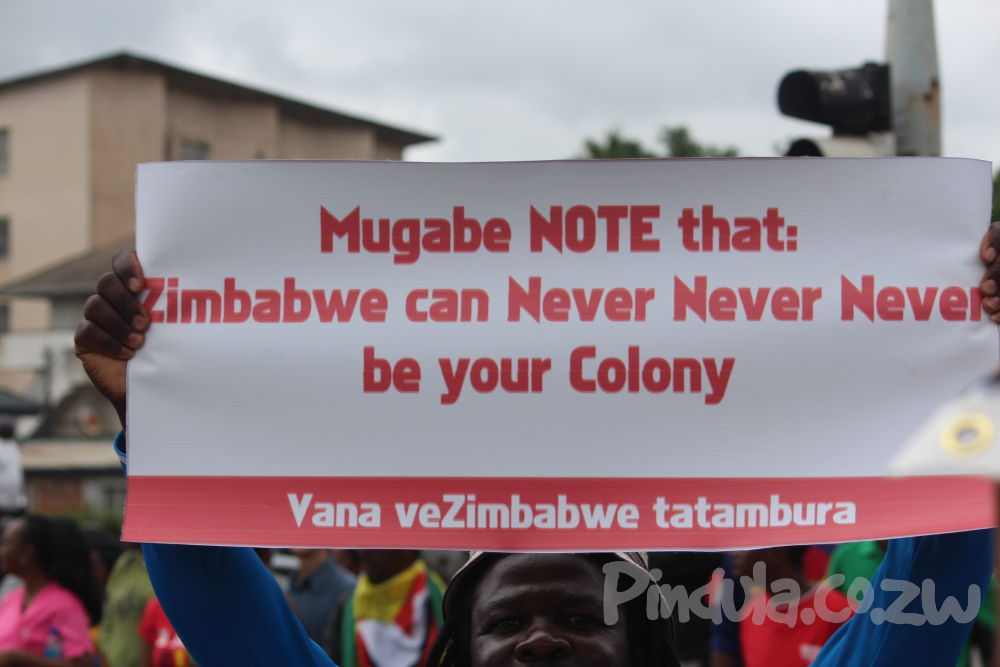 Military generals came out, thanked the marchers for the support and asked them to go home.

Addressing the crowd gathered at Zimbabwe Grounds, War vet leader Victor Matemadanda says “Let us now go and deliver the message that grandfather Mugabe and his typist-cum-wife should go home.”

Part of the crowd at State House now dispersing. Not clear what the military guy who addressed them said. Some say they are leaving to go home.

The crowd at State House listening to a military spokesperson.

Part of the group of marchers has arrived at State House and is now sitting, waiting for others to arrive:

There was a bit of lack of coordination in terms of gathering at Freedom Square. The huge crowd that gather there has been making its way back to State House. 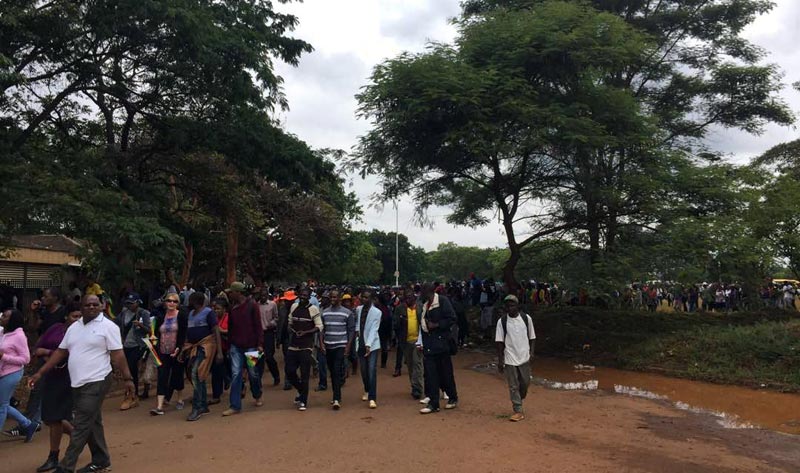 Protesters arrive at Freedom Square which is the open space by Rainbow Towers, Harare. 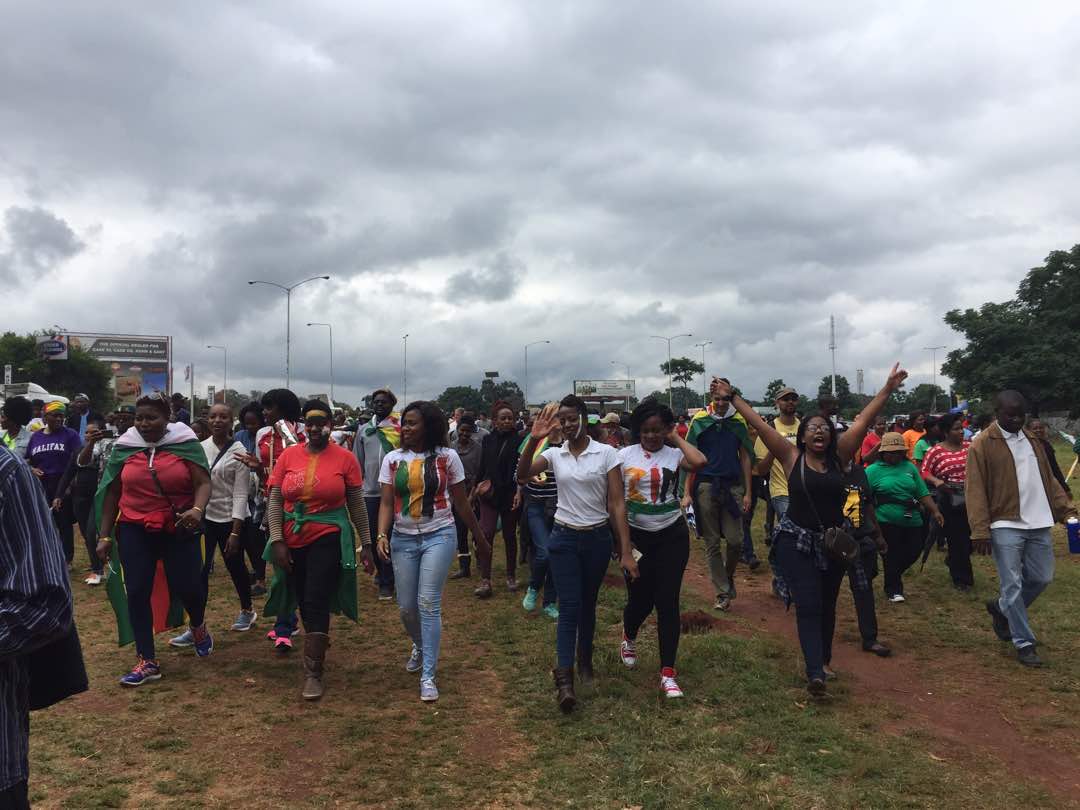 Kombi with protesters turned left from Chitepo into Bishop Gaul. 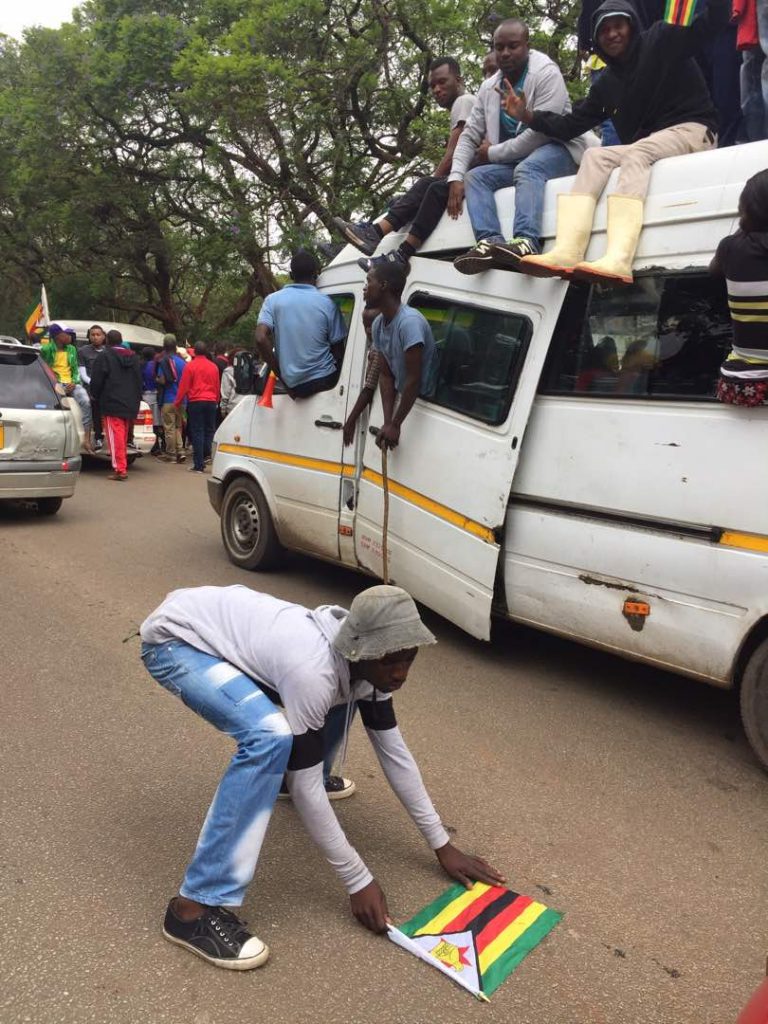 A soldier poses for photos with some ladies at Freedom Square in Harare. Marchers are coming in crowds to Freedom square where a rally to call for Mugabe to resign is scheduled to take place this afternoon. 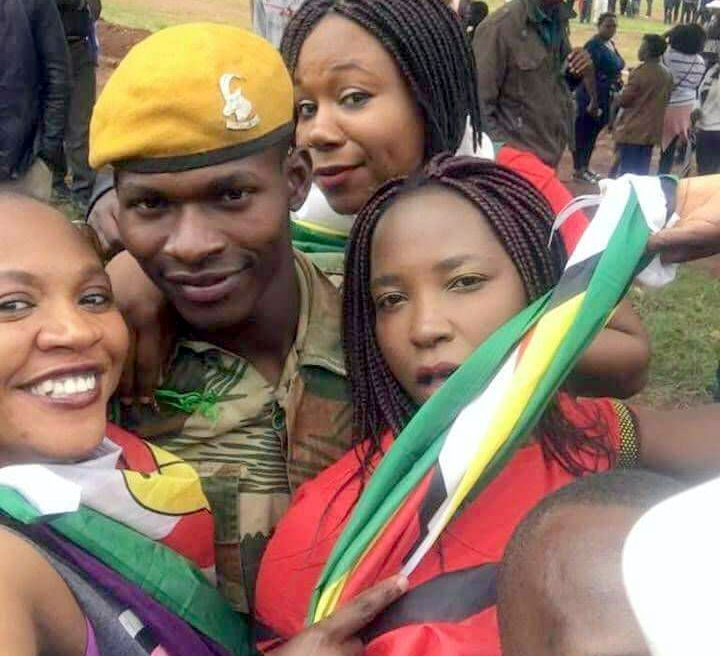 No police officers in sight in Harare today. It’s the military that are protecting the marchers. 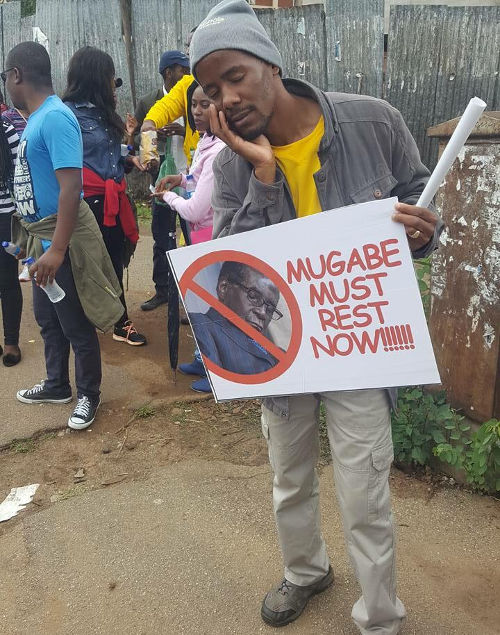 Marchers that were at State House now marching back towards town after being addressed. To join other marchers at freedom square.

Robert Mugabe road sign, vandalised and thrown into the trash 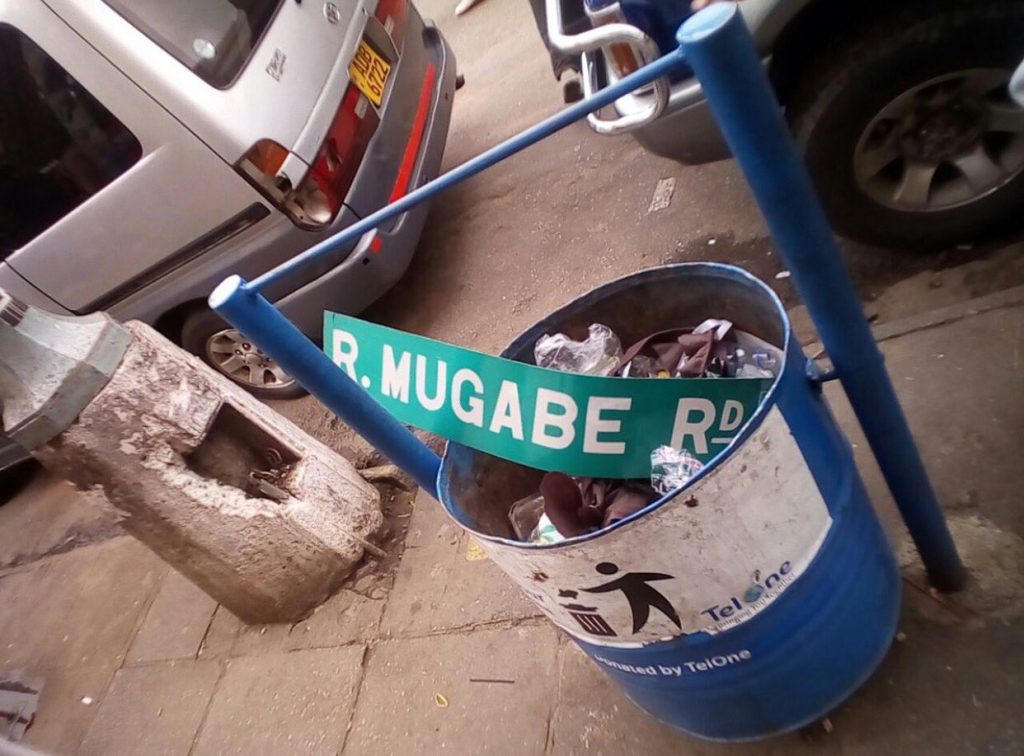 If #Mugabe thought he had the people, then he was dreaming #Zimbabwe #Mugabemustgo #MugabeMustFall pic.twitter.com/tyQNRI5KNL

Crowds of thousands of Marchers still making their way to the State House. A lot of marchers have carried their Zimbabwean flags. Carrying a Zimbabwean flag was banned last year after the #ThisFlag protests. 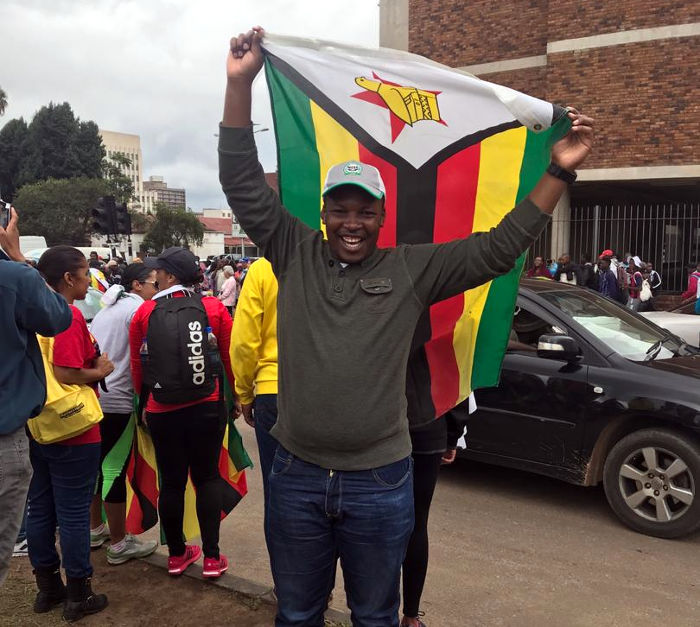 11:00 AM – Marchers have arrived at Freedom Square next to show grounds

Zimbabweans are gathering today at Zimbabwe Grounds in Highfield where they will march to State House in solidarity with the intervention by the Zimbabwe Defence Forces (ZDF) and to call for President Robert Mugabe to step down.

Pindula will be giving you live updates of the march as it happens. 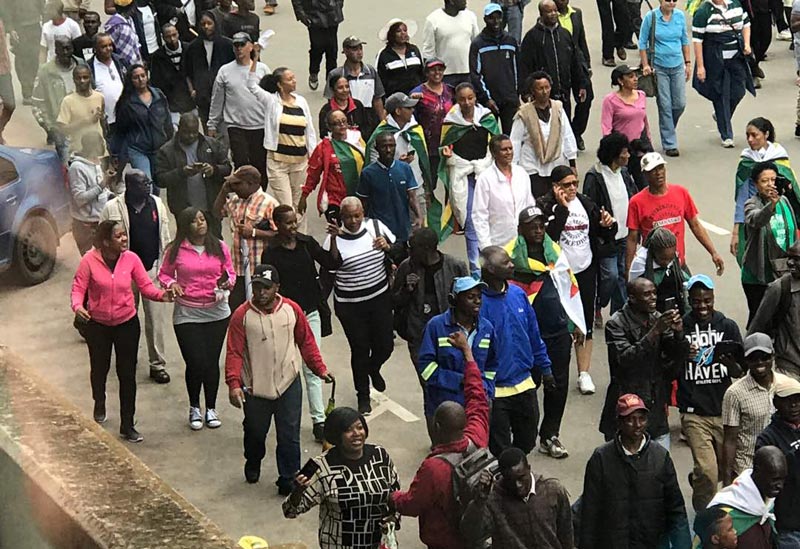 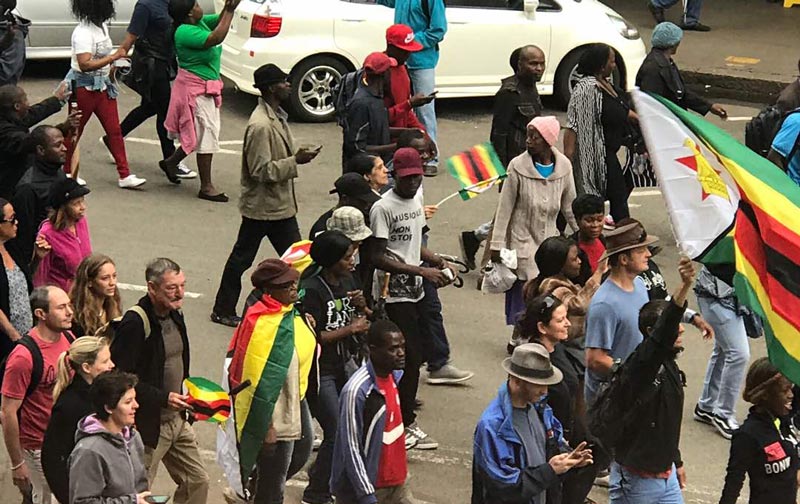 What Social Media Is Saying

The march against Mugabe’s rule is now in process in Harare as thousands march to his home as a sign of defiance against his refusal to step down. pic.twitter.com/IWJeIsGubg

In March 2007, opposition leader Morgan Tsvangirai was at a prayer rally at Zimbabwe Grounds. He was arrested and beaten badly. pic.twitter.com/8ZnwenuVKu

#Zimbabwe anti- Mugabe rally. People run up to soldiers, thank them for liberating them … some trying to take selfies pic.twitter.com/mElTAZ7SAz

#MugabeMustGo solidarity protest in #London at 11am Zimbabwe Embassy, 429 The Strand. No party regalia please. This is history in the making. See you there! pic.twitter.com/pmBgnCMzEX

Rallying the troops at the Campaign HQ. On our way to Fourth Street now.