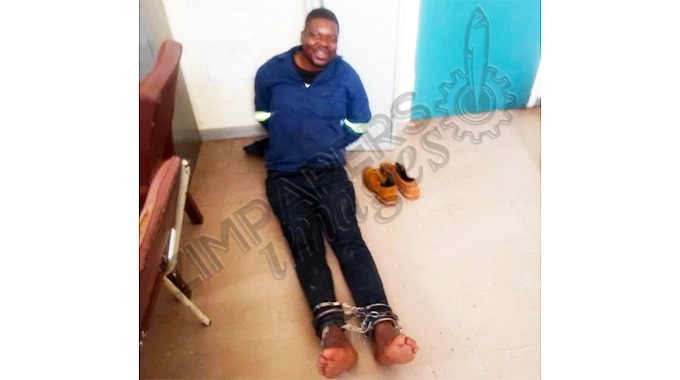 Muvevi (42), was said to be well-trained and not an easy person to attack during operations.

He has been likened to another former detective Joseph Nemaisa who single-handedly confronted five armed robbers who were holding his family hostage at his Chadcombe home in December 2021 and killed three of them while the other two ran away.

CID officers who were pursuing Muvevi from Hwedza where he shot dead three people and seriously injured another caught up with him in the Chiduku area of Rusape.

Narrating the events leading to Muvevi’s disappearance from Chiduku on Saturday, 14 January, a villager who is a nephew of the late Prophet Sirage (Crispen Kanerusine) who had been shot dead the previous day, said he gave the killer drinking water unaware that he killed his uncle.

Madzibaba Sirage’s nephew, only identified as (Rob) said he was shocked when he later learned that Muvevi had gunned down his uncle in Hwedza. He said:

I do not regret giving him water. It was my uncle who was fighting his killer in death and I think he also wanted Muvevi to be exposed as he tried to run away from the crime scene in Wedza.

Mukomana (Muvevi) was fleeing from police towards Chiduku driving his white sedan vehicle, Muvevi fired three shots at the officers who were in pursuit at Maruwani Bridge.

He then fired another shot which hit the police vehicle and immediately reversed his vehicle before driving for about 500m, turning into a small footpath leading to my homestead.

Rob said Muvevi then entered his homestead and entertained him unaware of what had happened. He said:

After greetings, Muvevi asked for some drinking water which I gave him.

He then inquired about gold mining areas and I showed him the area by just pointing at the mountains nearby.

He also asked for matches and I called my son who brought a box and gave him.

As Muvevi was explaining to the nephew that he can identify gold when he sees it, his phone vibrated. Said Madzibaba Sirage’s nephew:

I did not panic though I asked myself silently why he was carrying the pistols.

I then noticed some blood stains on his other shoe. I then called my son and quickly excused myself but he was not bothered about it.

I left him there walking towards the area I had pointed out to him as a potential gold mining place.

When the nephew got home a few meters away from Muvevi, police arrived and asked him about Muvevi’s whereabouts. He said:

I did not know his name then and I told the police the person they wanted had just left my homestead showing them the direction he took.

As we ran towards the direction he took… we then spotted him coming out of the gorge.

According to the slain prophet’s nephew, he heard one of the police officers saying:

Let us retreat. We have known this guy for a long time.

We know his records in the security sector so we cannot just confront him.

This is when I heard that my uncle had been shot dead by the man whom I had entertained a few minutes earlier. I was shocked.

Muvevi disappeared abandoning his car and escaped on foot.

Muvevi appeared in court on Friday charged with four murder charges and two attempted murder counts. He is expected in court on 6 February 2023. | NewZimbabwe.com