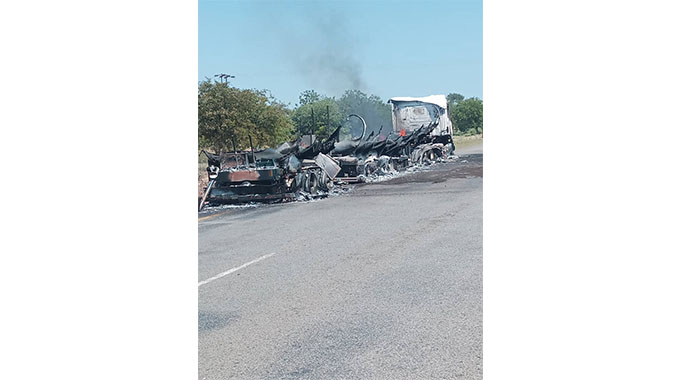 A Bulawayo-bound tanker carrying 32.2 tonnes of sulphate was burnt to a shell after it caught fire near Beitbridge on Tuesday morning.

The officer commanding police in Beitbridge District, Chief Superintendent Tichaona Nyongo said the incident occurred at around 5 am about 20km out of Beitbridge along the Beitbridge- Bulawayo Highway.

The vehicle was travelling from South Africa to Bulawayo.

It is alleged that the driver of the trucker, aged 39 years, narrowly escaped death after the truck caught fire while he was attending to a mechanical fault. Said Nyongo:

Our preliminary investigations indicate that the truck driver who is employed by Nello Logistics of South Africa was driving a Scania horse and towing two trailers from South Africa to Bulawayo.

When the driver got to the 293 km peg, he noticed that the rear right wheel of one of the trailers was binding.

He said the driver had stopped the vehicle to check on the fault when he discovered that the wheel had caught fire.

The driver attempted to put out the fire but it was in vain as the truck was burnt. | Chronicle