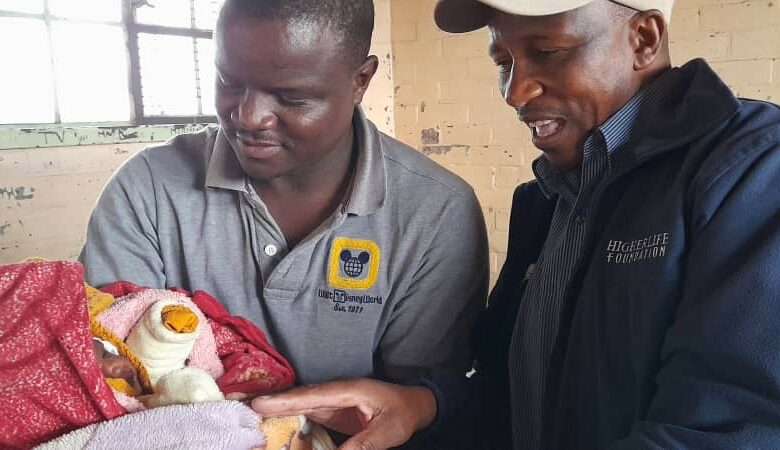 Ward 9 councillor Donaldson Mabutho and an unidentified resident with the newborn baby boy who was found dumped on a football pitch (Image Credit: CITE)

A newborn baby boy was found dumped on a football pitch in Bulawayo’s Matshobana suburb on Saturday.

Ward 9 Councillor Donaldson Mabutho told CITE that the infant was not wearing any clothes but was wrapped in a blanket while his umbilical cord was still attached.

He said some women who were going to plough their fields right next to the National Railways of Zimbabwe found the abandoned baby.

Mabutho said that while working in their fields on Friday, they saw a young woman in her early twenties moving up and down with a baby. He said:

The women said they saw the young woman yesterday (Friday) around 11 AM. She moved around for a long time until her movements made the women suspicious.

The women eventually asked her what she was doing and threatened to summon other residents if she continued to move up and down. She left at that point.

The councillor said one of the women who spoke with the young woman on Friday told her she was staying in Njube and going to Mzilikazi. He added:

I believe the girl stays at either one of these places. We believe she returned later and dumped the baby, only wrapped in a blanket. It means the baby was there all night.

The women then called other residents and I was then informed about the incident and made my way to the scene.

… We then went to Matshobana Police Station, where the baby was left in the care of the Victim Friendly Unit who said they would take him to the hospital.

The baby would then be taken to the Social Welfare Department.