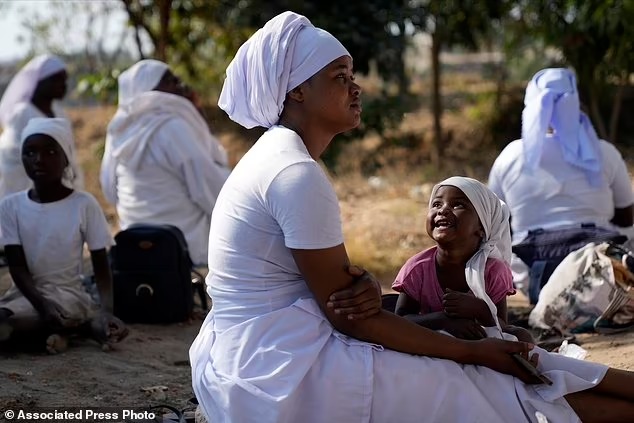 A woman member of the Apostolic church attends a prayer session in a bushy area in the impoverished Epworth region outside Harare, Friday, Sept. 16, 2022. Church members in Zimbabwe are getting their children vaccinated against measles in secret amid a deadly outbreak. It’s to avoid being shunned by religious leaders who are opposed to modern medicine. (AP Photo/Tsvangirayi Mukwazhi)

Mothers who are members of Apostolic sects, who are referred to as madzimai, have resorted to sneaking to clinics behind their husbands’ backs to vaccinate their babies against measles.

Some Apostolic sects consider vaccination taboo and forbid members from getting medical care insisting that all their health problems are solved through prayers.

Adherents put their faith in prayer, holy water and other measures to ward off disease or cure illnesses.

Zimbabwe has been grappling with a deadly measles outbreak since April 2022 which has killed more than 700 children across the country.

Many were unvaccinated because of religious reasons, Information Minister Monica Mutsvangwa said.

At Mbare Polyclinic in Harare, some women were taken to the back room to get their children vaccinated in secret, and in defiance of religious doctrine that forbids them from using modern medicines.

Lewis Foya, a nurse at the clinic told The Associated Press that the advent of the measles outbreak saw children dying so they are now coming secretly to get help. He added:

They have a belief that if they get vaccinated, they become unholy so that’s the doctrine that they pass down to the women.

Foya said the patriarchy in the church means women have “no power to openly say no” to instructions.

As a result, to save their children, some mothers visit clinics in secret, sometimes under the cover of the night and without their husbands knowing.

At the Mbare clinic, one mother who identified herself as Winnet Musiyarira said people had learned from the vaccine hesitancy prevalent during the COVID-19 pandemic. She said:

A lot of people were misinformed during that COVID-19 period because they were told that when you get vaccinated there will be after-effects.

So due to that a lot of people lost their lives and it was important for everybody to take that seriously.

So when I heard about measles I just said I have to take my kids to the hospital and get them vaccinated.

Musiyarira said she wasn´t a member of a religious group but some were women wearing matching white headscarves to indicate they are part of an Apostolic church and were at the Mbare clinic to get their children vaccinated secretly.

The women, however, declined to speak to The Associated Press for fear of reprisal from church leaders. | MailOnline