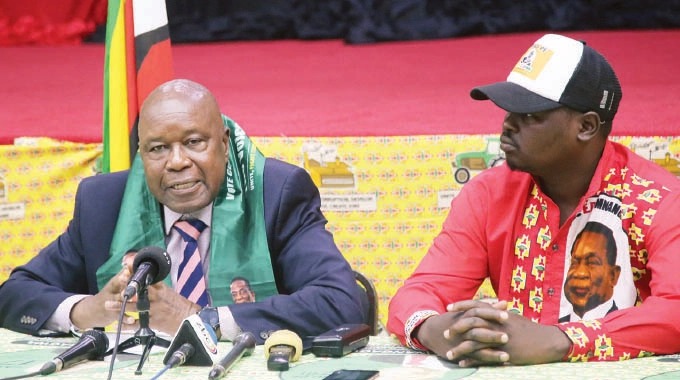 ZANU PF has accused Nelson Chamisa and his party, CCC, of using every occasion to lie about the situation in the country.

Mutsvangwa also accused Chamisa of lying about a suspected petrol bomb which exploded at his rally in Chinhoyi recently. He said:

Now here is a man who is a blabbermouth, anything that crosses his mind, he utters it out even if it has no basis in fiction or fact.

Please we say to Chamisa, take your party seriously; we fought hard for democracy which makes you opposition.

Just like the ZCTU could not have existed during colonial times except after independence, we created an environment for the trade unions (although) of course they came back and bit the hand that delivered them freedom.

Chamisa always abuses the hand that delivered him freedom by lying against the party of Zimbabwe’s liberation and by trying to give false stories about what is happening in Zimbabwe.

Mutsvangwa said ZANU PF will deliver a crushing defeat to CCC in the 2023 elections so much that it will be like “a whirlwind” and “a ball from the political heavens.” Said Mutsvangwa:

Our electoral machine has been fully retooled. What is left is oiling it and unleashing it against an MDC, CCC outfit who the original founders are no longer finding favour of, as Mr Tony Blair did.

So if the original founders of the CCC are no longer found in favour of it, who can make them succeed in the next election?

Nobody, so they are going to be hit by a whirlwind come elections. We want to score a victory which mimics or even outshines the one we did in 1980 which delivered Zimbabwe to independence.

So, Chamisa CCC do not say you were not warned, the whirlwind is coming and you are going to be hit by a ball from the political heavens.