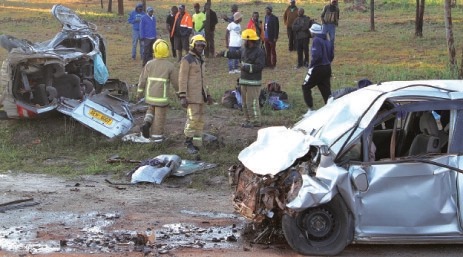 A speeding wanted robber who was driving a stolen vehicle allegedly caused the road accident that claimed six lives in Mutare recently.

According to The Manica Post, one of the Honda Fit vehicles that were involved in the accident that killed six people near Mutare Teachers’ College on Sunday morning had been stolen in Chipinge the previous week.

The mastermind of the robbery was driving the car and he died on the spot.

He said that the driver of the stolen vehicle was Tawanda Chitambo (31) of Chikanga 1 in Mutare.

Chitambo had stolen the Honda Fit he was driving from Takudzwa Ngqobi (20) in Chipinge on 29 August.

Insp Muzondo further revealed that police were hunting for Chitambo’s two accomplices in the robbery who were still at large. He said:

During enquiries to establish the registered owner of the Honda Fit, it was established that the vehicle had been stolen from a taxi operator plying the Mt Selinda-Chipinge route.

Investigations revealed that Mr Ngqobi was hired by the three suspects to ferry them to Mutakura Dam Turn-off.

When they arrived at their intended destination, the suspects ordered the complainant to drive further into the bush where they robbed him of his car, US$80 and a cellphone. They tied him up and fled from the scene.

The complainant later freed himself and made a police report.

Chitambo reportedly started using the stolen vehicle as a pirate tax and was killed in the accident on 4 September after he had picked up passengers in Mutare.