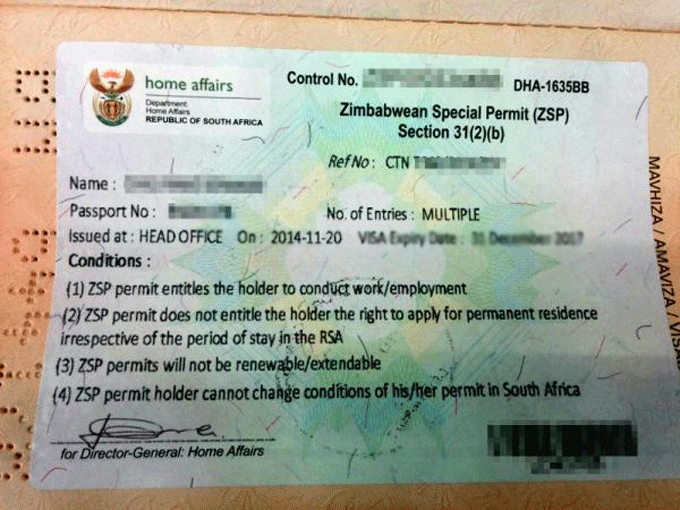 South Africa has extended the validity of the Zimbabwean Exemption Permit (ZEP) Visa by another 6 months to mid-2023.

According to a statement released by the Department of Home Affairs, the next expiry of ZEP permits is now 30 June 2023 instead of the original 31 December 2022. Reads the statement:

1. As previously communicated, the Department of Home Affairs (“DHA”) appointed the Departmental Advisory Committee (“DAC”) led by Dr Cassius Lubisi to assess the visa applications lodged by the affected Zimbabwean nationals. The DHA also appointed an outside legal firm to handle all court challenges relating to the decision not to extend the exemptions granted to the Zimbabwean nationals and related matters.

2. The Minister of Home Affairs (“Minister”) received a progress report from Dr Cassius Lubisi. The report states that the DAC has met on several occasions in order to execute its mandate, and their last meeting was held for the whole day on the 1st of September 2022. The DAC recommended to the Minister that in view of the progress thus far, it will be prudent for the Minister to consider extending the period within which the affected Zimbabwean nationals will have an opportunity to apply for visas and/or waivers for a further six months.

3. The Minister has carefully considered the request and decided to extend the period by a further six months, that is, 31 December 2022 to 30 June 2023.

Another factor considered by the Minister is that few Zimbabwean nationals have thus far applied for visas and/or waivers. To this end, the Minister has issued another Directive annexed hereto marked “A”

4. The Minister is committed to affording the affected Zimbabwean nationals another opportunity to apply for one or other visas and/or waivers provided for in the Immigration Act.

5. The Directive containing the decision of the Minister will be communicated through diplomatic channels to the Zimbabwean Ambassador in South Africa.

6. The DHA calls upon all the affected Zimbabwean nationals to make use of this window of opportunity and not wait for the last moment to lodge their applications as is the case now. There will be no further extension granted by the Minister.