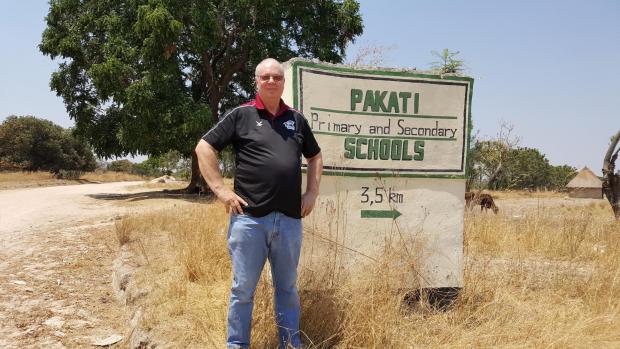 Chris Walker on a previous visit to the school in 2018

A British man who taught at Pakati Secondary School in rural Murewa from 1989 to 1991 is set to fly to Zimbabwe next month to hand over computers to two local schools.

Chris Walker, who lives in Great Horton, Bradford, has since set up Friends of Pakati, which has donated computers to both his former employers and the nearby Pakati Primary School.

The donation is aimed at improving the lives of young people studying at two schools with limited resources. Said Walker:

The facilities we have in Britain are far better than in Murewa, so I’m trying to level things up a bit and help give the students a chance.

The students really want to learn. We often take education for granted here, but there the parents work very hard to cover school fees.

Education means a lot to them – for many, it’s their way out of poverty.

Zimbabwe is one of the best-educated countries in southern Africa, but there are issues in Murewa which make it harder.

Without electricity, the schools are very dark. Students and teachers also don’t have access to basic things like the internet and photocopiers.

Friends of Pakati is accepting donations via PayPal and GoFundMe.

Walker said he is still looking forward to going back to Murewa despite the difficult situation in the area: He said:

I’m hoping to meet a few former students and some old friends, and I’m planning to visit another three schools in the area. I’m very excited.