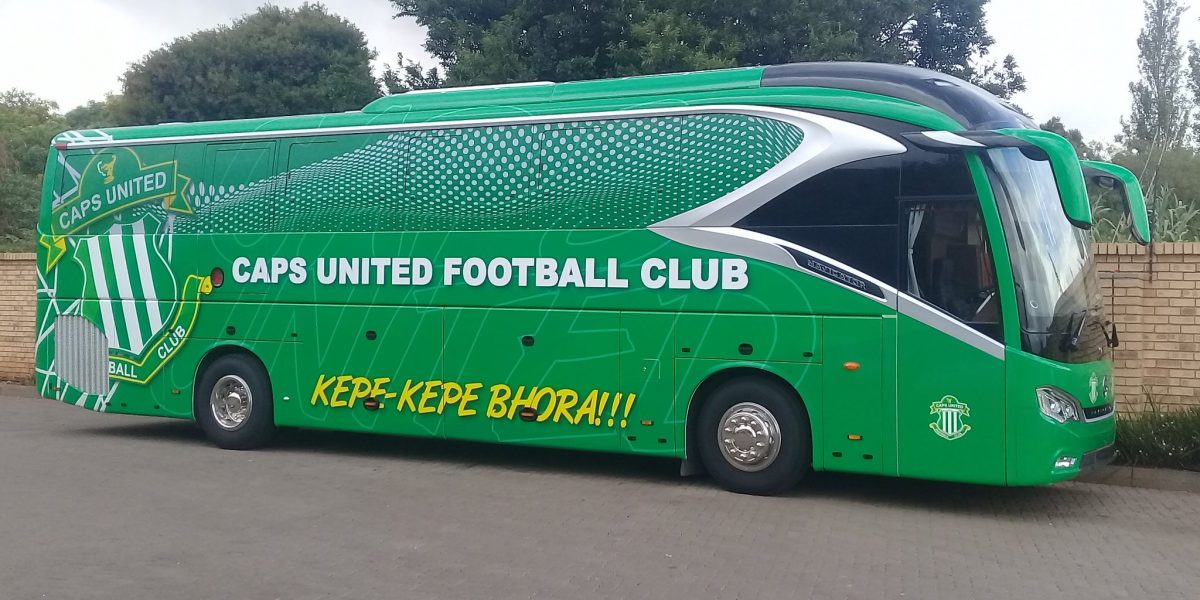 Former Warriors striker Nyasha Mushekwi said that he decided to buy a brand-new bus for his former club CAPS United after realising that the biggest challenge facing footballers in the country was unreliable transport.

Mushekwi, who now plays for Zhejiang in the Chinese Super League said he bought a bus for his former club in appreciation for the role the club played in his development as a professional footballer.

CAPS United “took a gamble” when they signed Mushekwi as he was a basketball player and only asked to train with the club to stay fit. He said:

There was a lot of controversy but in the end, everything paid off because here we are today. The coach and the club took a gamble on me and I feel I still owe them because I would have never been where I am today if it wasn’t for them.

I wanted to repay them, and I was thinking of ways to do that. Sending kit and stuff like that is one thing, but I wanted to give them something more lasting. Something that would benefit them for a long time.

So, I looked at the challenges facing footballers in many parts of Africa – and one of the biggest challenges is transport. In Zimbabwe, most of the travel between games is by bus.

But not a team bus, just any bus. That led to many challenges. Often the bus would simply break down on the journey, or it would arrive late because it had broken down coming to pick up the players.

The longest trip we made with CAPS was 12 hours when we played against Hwange. The distance is not so much, but there is no direct road. So first you have to travel south to Bulawayo and then up north to Hwange.

In my last game there, we left late because there were some issues over payments that had not been made, so we only arrived at 5 am on the day of the match. It was a 3 pm kick-off, but we still managed to draw.

When I left Zimbabwe, I saw what buses teams in Europe – and even South Africa – were using, and I wanted to give something back to CAPS for taking a chance on me. In 2019, I decided to buy them a proper team bus, as they have in Europe.

Players need space on the bus, they have to be comfortable. You don’t want to be squeezed up like you are in a normal bus.

The seats have to recline and there should be TV screens at the back of the seats in case they’re travelling long distances. I bought the bus in China and sent it to Zimbabwe.

Mushekwi said he was frustrated by Zimbabwe’s tax authorities as he ended up paying import duty enough to buy another bus. He said:

Getting it there was a big challenge. I just wanted to donate the bus, but suddenly so many people got involved.

Some people didn’t want the bus in Zimbabwe. I don’t know whether it was just jealousy. It’s just African politics in football, I guess.

They were trying to sabotage the whole process, making me pay more taxes, and more duties. In the end, I ended up paying money that could have bought another bus.

But I am pleased that I did it. People have sent me photos of the bus being used by not only CAPS but the national cricket team, the women’s national team and other teams.

I am pleased that it is not only working for one purpose, which was CAPS United, but for the greater good.

The whole process of also trying to get it into Zimbabwe was a big problem, but in the end, the whole purpose was to help – and it’s helping a lot of people.

3 comments on “Mushekwi Speaks On Buying A Bus For CAPS United, And The “Sabotage” He Faced”