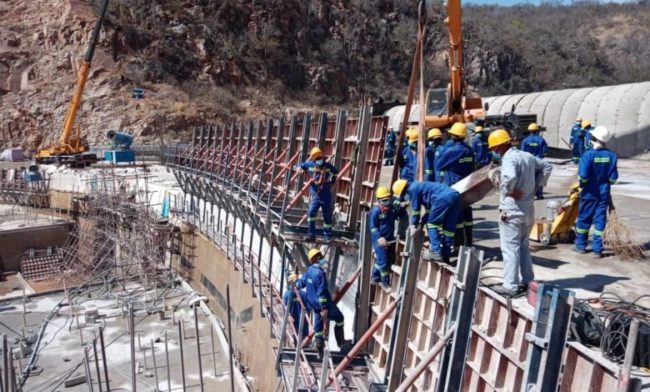 The Zimbabwe Revenue Authority (ZIMRA) has garnished for the fourth time in six months, bank accounts of a Chinese contractor, China International Water and Electric Corporation (CIWE) over non-payment of taxes.

The company is developing Lake Gwayi-Shangani and the latest development is said to have slowed progress on the project.

It also emerged that the Finance ministry was struggling to release funding on time, further delaying the century-old water project.

Sometime in June, CIWE contract workers went on strike due to the late payment of May salaries.

This is contained in a presentation done by Lands, Agriculture, Fisheries, Water and Rural Development ministry chief director Tinayeshe Mutazu, during a recent tour of the giant dam by the Parliamentary Portfolio Committee on Budget, Finance and Economic Development.

Disbursement of funds from the ministry of Finance (and Economic Development) is currently lagging cash flow requirements for running the project. Due to a lack of funding, the project failed to receive cement consignment from  June 6, 2022, to  June 30, 2022.

Zimra garnished CIWE accounts on June 13, 2022, for the fourth time in 2022. The revenue authority is citing tax compliance issues and is demanding VAT (value-added tax) payment soon after submission of an IPC (interim payment certificate) to the employer.

Garnishing of accounts which has not been resolved since the beginning of the year will continue to hamper progress on-site if a permanent solution is not made. Non-payment has severely disrupted progress on site. The target of four metres was missed for June 2022.

Mutazu did not disclose how much CIWE owed the national revenue collector.

The contractor reacted by scaling down all operations to contain the spread of the virus. Normal operations resumed on May 22, 2022.

The project, which was awarded to CIWE in 2003, has faced a lot of false starts due to a lack of funding.

Construction of the Lake Gwayi-Shangani, according to the government, is now at 67% completion.

It is part of the National Matabeleland Zambezi Water Project expected to be a solution to the Matabeleland region’s perennial water problems while creating a greenbelt along its 240km path.