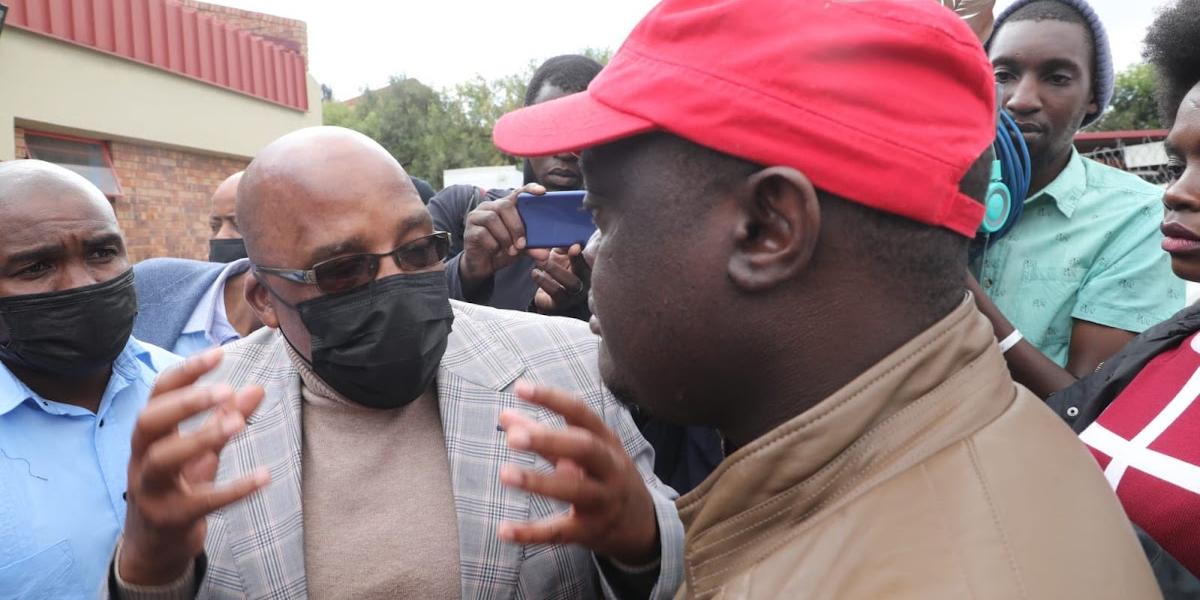 Home Affairs minister Aaron Motsoaledi gives reasons to this unidentified man why he should not be part of a meeting between government and community members of Diepsloot. Image: Antonio Muchave

In November 2021, SA’s Cabinet took a decision not to renew the special permits granted to just under 200 000 Zimbabweans when they expired on 31 December.

ZEP holders were given a 12 months grace period to apply for other types of permits or leave South Africa.

In its court application, HSF said the decision will leave thousands of Zimbabweans desperate and vulnerable.

But in a statement issued on 28 June 2022, Motsoaledi accused HSF of trying to “blackmail the nation”, saying the majority of South Africans support the decision not to renew the ZEPs. The statement reads:

1. In an open and transparent democracy, organs of civil society have an important role to play.

3. The recent surprising court action launched by the Helen Suzman Foundation (HSF) is a perfect example of the destructive role that some non-governmental organisations (NGOs) are capable of.

4. The Minister of Home Affairs has always engaged the HSF regarding some of the challenges faced by the Department in the past. The Minister has engaged with HSF on several occasions with positive outcomes.

5. Since the announcement of the decision of the Minister not to extend the exemption granted to Zimbabwean nationals, he has engaged with several members of civil society with a view to managing the consequences of his decision collectively.

6. This time around, the HSF was conspicuous by its silence. Little did the Minister know that the HSF was behind the scenes planning the so-called “public interest” court action.

7. There’s a disturbing and growing trend by some NGOs to sabotage the polycentric and policy-laden decisions taken by Government by using the courts. This development must be nipped in the bud as soon as possible.

8. South Africa is now under the dictatorship of some of the NGOs with some having faceless and dubious funders. Their ultimate aim is to assist in the dislodgement of government of the day from power by all means available.

10. The HSF access to the courts is guaranteed in the Constitution. However, this should not be a licence to abuse the Bill of Rights by some armchair critics, who have no idea of the sacrifices and deaths of many freedom fighters, while they sat in the comfort of their homes because of the colour of their skin. They now claim to be champions of the human rights of the African people on the whole continent.

11. The HSF is now conveniently playing the victim card by alleging that it is being threatened. We have no evidence of the alleged threat. If it is true, the Minister does not condone and strongly condemns such threats. On the contrary, it is public knowledge that the Minister was openly threatened after taking the decision. Death threats were issued against him publicly.

12. The Minister and the Department of Home Affairs will vigorously defend the lawful, reasonable and rational decision of the Minister. We cannot be expected to throw up our hands in despair and fail the people of South Africa.

13. Having said that, the Minister’s door is always open for constructive engagement, rather than waste the ever-shrinking Government resources to defend unnecessary court challenges.

14. The Minister hopes that sense will prevail and that the HSF will opt for engagement than embark on a spurious court action, which can only lead to further tensions between citizens and foreign nationals.

15. If HSF has the interests of Africans in the continent at heart, the Minister expects it to play its constructive role in assisting the affected Zimbabwean nationals to apply for one or the other visas provided for in the Immigration Act.

16. The Minister calls upon all affected Zimbabwean nationals to ignore the false hope created by the HSF and adhere to the procedures outlined by the Department in various public notices and communication.

17. Additional information on the Minister’s decision are available on the Department’s website via this link: http://www.dha.gov.za/index.php/immigration-services/gazetted-extension-of-zep

18. Affected Zimbabwean nationals who still need guidance can send their queries to; ZEPenquiries@dha.gov.za