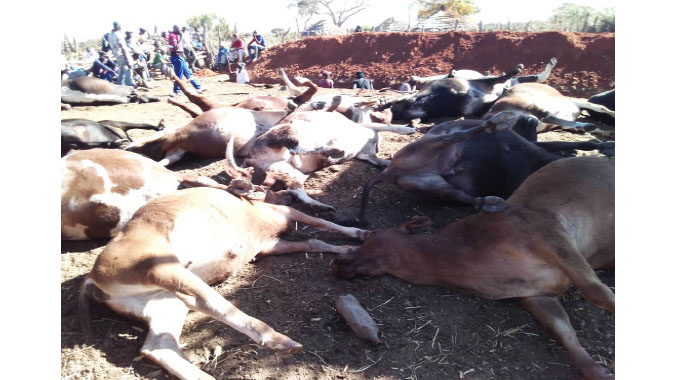 The family from Nkayi which lost 21 cattle after they were poisoned accidentally is set to receive donations including cattle, from well-wishers.

Reports indicate that the cattle, valued at over US$8 500 died after being dosed with a deadly grain protectant.

Dosing is the administration of a worm remedy to cattle by mouth and is usually done to ensure that cattle are able to feed properly especially during the dry season when the grass is less palatable as it will be dry.

The cattle were on Sunday last week given a tablet each of aluminium phosphide, which is used for fumigating stored grain, seeds and tobacco among others.

The family homestead is in Dolahali area in Nhlekisa Village under village head Ncube.

Atwell Mahlangu, a member of the organising committee that has been tasked to coordinate the donation, said:

We have people from all over who have been touched by the tragedy that befell the Mpofu family and we have been mobilising to see how best we can assist them.

I am not in a position to state the number of cattle that we have raised as of now but come tomorrow, we will be in a clear position. Some have donated cash, cattle feed and vaccines among others.

He said they have been using social media to mobilise support for the family after being touched by the story. Said Mahlangu:

People read the story and were touched by the incident and we thought of doing something.

We have a WhatsApp group that focuses on farming issues where we have been mobilising assistance for the family.

It is alleged that one of the family members bought grain-preserving pesticide and gave it to a teenage boy to take to the Mpofu home.

However, the young man forgot the message and when he got home, he said the contents were for dosing cattle.

The elders administered the chemical to the cattle and only one ox survived after the family was advised to make it drink opaque beer.

A heifer which is expecting, and two calves also survived as they were not given the dose.

All the dead cattle were buried following advice against burning them by the veterinary officer in the district.