Harare City Council (HCC) has dismissed reports in The Herald, a state-run publication, that Citizens Coalition for Change (CCC) councillors will get US$12 000 in fees for probing the US$240 million Pomona waste-to-energy project.

Critics say the deal between Netherlands-based Geogenix BV company and HCC, which will see Geogenix BV pocketing US$22 000 per day for 30 years, was imposed on the local government authority and was instituted in violation of procurement regulations.

The opposition CCC party wants the deal scrapped saying it is bad for the council and ratepayers.

This Monday, The Herald published an article titled “CCC councillors in bribe storm over Pomona” in which it claimed that “A GROUP of CCC councillors is allegedly set to pocket US$12 000 in fees from Harare City Council for ‘investigating’ the Pomona waste management deal, now a done deal with Government backing.”

In response to the article, HCC said the report was not true. Said the city fathers:

Today’s @HeraldZimbabwe carried a story in which it alleges that the Committee probing the Pomona deal will pocket US$12 000 each in fees. The correct position is that the Finance & Dvpt Committee is still to convene a meeting to determine the fees to be paid. 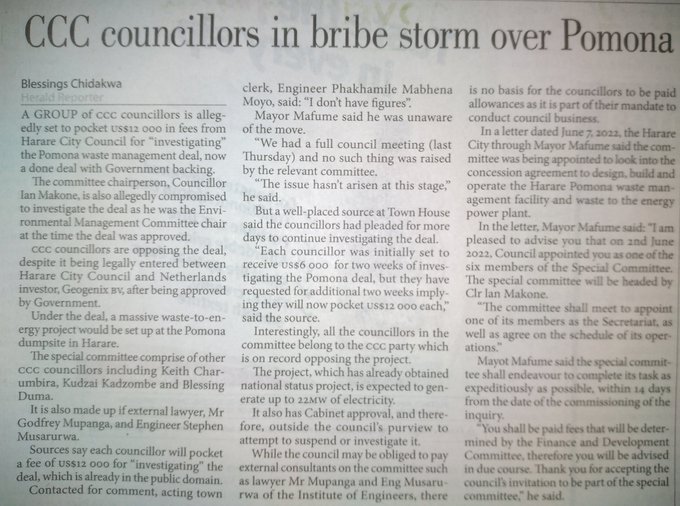 The City of Harare has since appointed a Special Investigation Committee to look into the Pomona Waste to Energy project. The central government says the project cannot be stopped.

The heavily criticised project stipulates that Harare will pay Geogenix BV US$40 per tonne of waste delivered.

The stipulated daily delivery is at least 550 tonnes or a minimum of 200 750 tonnes per year – translating to US$8.03 million for the company in the first year.

This means that the City of Harare will pay Geogenix BV a minimum of US$14.6 million annually starting in 2027 until 2052.

CCC councillors say Harare does not have the capacity to deliver the required waste, therefore, believe that the deal was designed for the local authority to fail a case which will see the city still being invoiced as though it had made the deliveries.