Facts East Africa, an online-based research institute has confirmed that Zimbabwe’s interest rate is the highest in the world at 80 per cent.

There are indications that the southern African country intends to raise the interest rate higher. Said the organisation:

FACT: Zimbabwe’s interest rate is the highest in the world at 80%, but the country’s central bank is planning to double it.

Investigations by Pindula News show that Argentina follows Zimbabwe at a distant second with an interest rate of 44.5 per cent. See attached below a graph by advisor.visualcapitalist.com 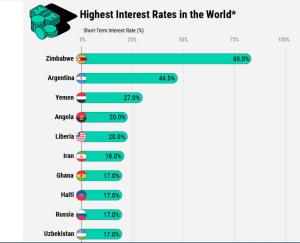 In April this year, Zimbabwe’s central bank, the Reserve Bank of Zimbabwe (RBZ) raised interest rates to a record high, to halt a decline in its currency and rein in surging inflation amid food and fuel price pressures that have been exacerbated by the war in Ukraine.

RBZ raised interest rates by 20 percentage points, up from 60% to 80% as it battles the growing threat of inflation.

The Monetary Policy Committee (MPC) of the RBZ which met on 1 April 2022, says the move is necessary due to rising inflationary pressure and the recent movement in the parallel forex market.

At that time, with inflation at 72.7% and the main bank rate at 60%, interest rates were negative. This meant that a person could borrow money from the bank for ‘speculative’ purposes, such as buying foreign currency.

With higher interest rates, RBZ hoped to make it less attractive for people to do so. The latest interest rate makes it more expensive to get a bank loan.

RBZ had last raised rates at the MPC’s last meeting on October 28, increasing them by a similar 20 percentage points.