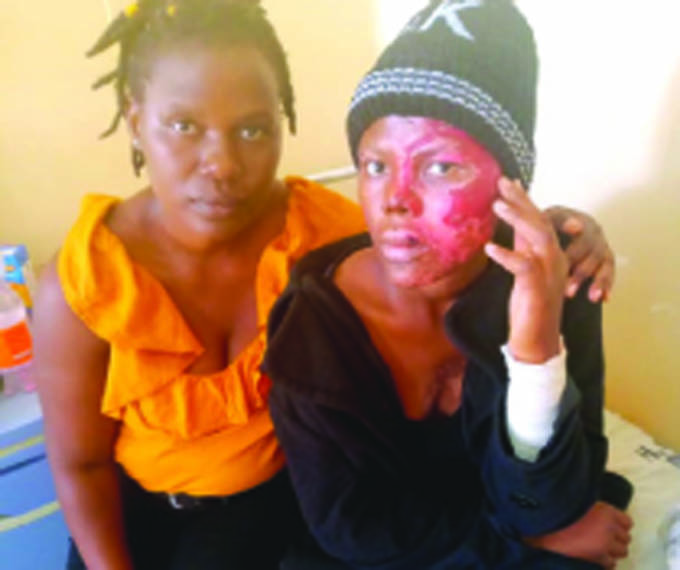 Two siblings from Middle Sabi, Chipinge, recently suffered severe burns after they tried to use hand sanitiser to light a fire to prepare their breakfast.

Kumbirai (16) and Tawanaishe Ndunduma (12) were rushed to Chipinge District Hospital where they are recovering from their injuries.

Narrating what transpired on the fateful day to The Manica Post, Kumbirai revealed that they were rescued by their neighbours who rushed to their home when they heard a deafening sound. Said Kumbirai:

We were home and our mother was away in the fields. My brother, Tawanaishe, started complaining of hunger. He decided to light a fire to prepare breakfast.

He tried to set the fire but failed. He went to the dining room and took a container of hand sanitiser so that he could use it as fuel to start the fire.

The container burst, producing a deafening sound. I tried to rescue my brother but was also burnt all over the body.

I screamed for help and our neighbours came to our rescue. They used tree branches to extinguish the fire.

I think Tadiwanashe wanted to copy what other neighbours do when they use sanitiser to set the fire.

The siblings’ mother, Hilda Ndunduma who is a village health worker in Chipangayi, said:

I think my children tried to copy what other villagers do as they use hand sanitiser as fuel to set fires for domestic use.

On this fateful day, I questioned my children why the bottle of sanitiser was half empty. Little did I know that they were using it to set fire.

Since the outbreak of COVID-19, our community receives hand sanitiser from a local company.

Almost every villager is receiving about a litre of sanitiser every month from GreenFuel, while employees of the company receive about 5l of hand sanitiser.

Ndunduma is appealing for help to meet her children’s medical bills as they have been in hospital for more than ten days. She said:

It is almost 10 days (as of Wednesday) since my children were admitted in the hospital. The medicine they require is very expensive. Some of the drugs are not available at the hospital.

I need to buy gauze bandages daily which are used to dress Tawanaishe’s wounds. His legs sustained serious burns.

Some injections are very expensive and the hospital told us that the patients cannot share them. So far I have used close to US$250 for the children’s treatment.

I am grateful for the efforts being made by the hospital staff to assist my children. Kumbirai is recovering well.

My husband who accompanied us here has since been admitted as well after being diagnosed with sugar diabetes.

Those willing to assist the Ndunduma siblings can contact Mrs Ndunduma on 0771970750.