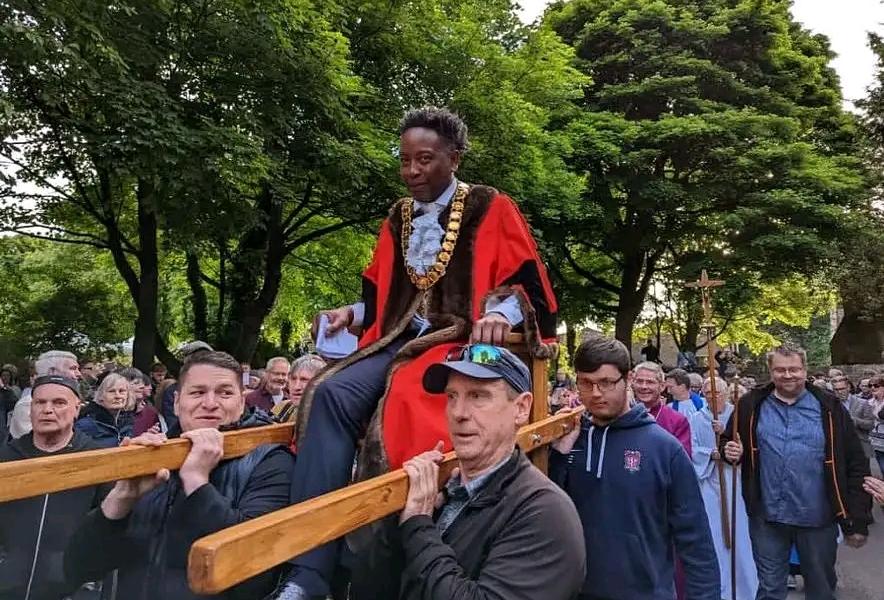 The Zimbabwean-born British politician was carried by four men around the Corby village to wild cheers and celebratory claps from a huge crowd.

The Corby Pole Fair started at 6 AM. The bells of St John the Baptist Church in Corby Old Village had been ringing since 5 AM to signal the start of the 2022 Corby Pole Fair.

Hundreds of people gathered to hear the first charter reading by the Parliament Stone outside the church.

Reverend Paul Frost read the charter as per tradition. The charter was granted to the village in 1585 by Queen Elizabeth I.

After the reading of the charter, Rev Frost, Chikoto and the village’s oldest resident, June Thomson, were lifted aloft and carried through the streets of the village.

The charter was read for a second time outside the White Hart and in The Jamb.

The Corby Pole Fair is a major community celebration for the town that comes around only every 20 years.

Corby resident Paul Balmer, who was last year commissioned to make a film about the Pole Fair said nobody is quite sure why the fair takes place once every 20 years. He said:

It depends on who you listen to and who you read. It may go back to 1226 when the first fair was granted by Henry II.

Generally, when we’re celebrating the Pole Fair we talk about 1585 which is when Queen Elizabeth apparently came here and got stuck in a bog and was rescued by Corby villagers and she rewarded them with a charter.

That’s one of the legends, there are many legends.

One Comment on “Corby Town Mayor, Tafadzwa Chikoto, Carried Through Streets In Britain”