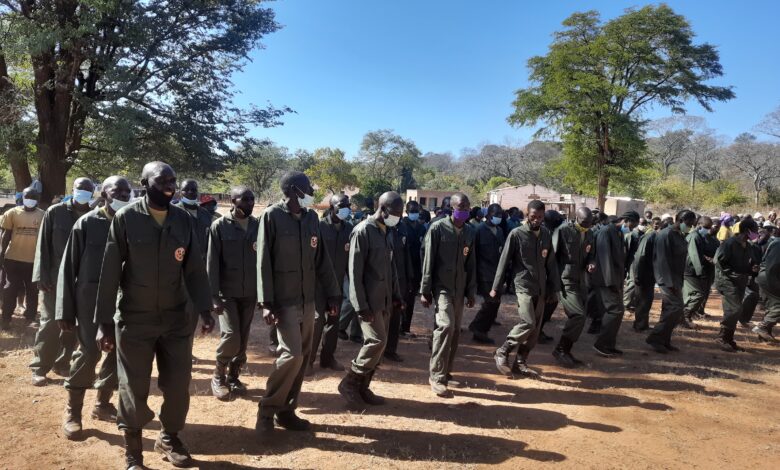 Some of the community anti-poaching volunteers in Hwange (Image Credit: CITE).

Villagers in Hwange’s Mabale area have taken the initiative to fight wildlife poaching by forming community anti-poaching units with the help of Painted Dog Conservation (PDC).

PDC is involved in the protection of endangered wild dog (painted dog).

To that end, it has started several programmes such as educating school children on conservation through bush camps.

The areas border Hwange National Park where the communities are exposed to conflict with wildlife.

The primary role of the anti-poaching teams is to search for and remove wire snares in the bush.

This initiative was started by the community. People organised themselves because they had also lost livestock to poachers who were setting up wire snares.

The volunteer programme started in 2015 when a dog was found dead after being caught by a wire snare behind the chief’s homestead.

We took it to the chief’s homestead and fortunately, there was a villagers’ meeting and because PDC was building a teachers’ cottage at Mabale Primary, villagers felt the donor, in this case being the endangered painted dog itself, was in danger and the funding for development projects would stop if it is not protected.

That is how it started and poaching sometimes rises and we take volunteers. In Mabale there are 45 volunteers, 41 for Dopota and 38 for Nabushome. In 2020 Dopota removed 5 439 snares.

This initiative was started by the community. People organised themselves because they had also lost livestock to poachers who were setting up wire snares.

Sibongile Nkala, chair of the Nabushome unit said the initiative has protected villagers’ cattle, goats, donkeys and even dogs from wire snares. She said:

We had lost cattle and goats which is why we felt we needed to take the initiative and remove wire snares.

This is meant to protect the painted dog but it has helped reduce the trapping of our domestic animals too.

Small game is also protected and we now see impalas, bucks and hares in our area which is good for conservation.