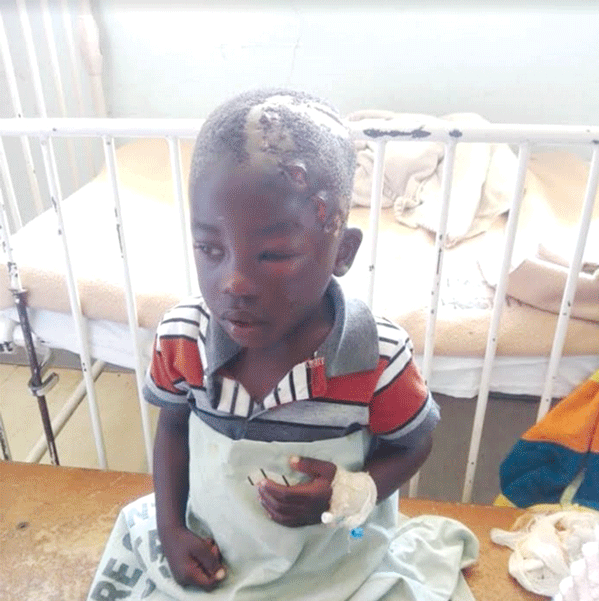 A three-year-old boy from Mutoko in Mashonaland East Province was seriously injured after he was mauled by a hyena at an apostolic sect shrine.

Denval Chakomoka is now admitted to Sally Mugabe Central Hospital after he suffered severe head injuries in the attack.

His parents are appealing for financial assistance to cover his medical expenses, among them CT scans.

The boy’s father Africa Chakomoka told NewsDay that the boy was supposed to undergo several head scans. He said:

It happened on Friday morning at a shrine in Masango village where my son and her mother had gone for prayers.

They were asleep and my wife woke up and saw a hyena dragging our son. The church members managed to confront the animal and it fled, but he was already injured.

I had to rush him to the hospital in Harare where he is admitted. They need at least US$300 for some head scans and we are appealing for assistance from well-wishers.

Chakomoka added that he had informed the traditional leadership about the hyena attack.

Police in Mashonaland East province told NewsDay they were yet to receive a report on the case.

Of late hyenas have been a menace in Mutoko and Murewa districts where they have been attacking people, leaving them with scars and at risk of contracting rabies.

One Comment on “Hyena Mauls Boy (3) At Prayer Vigil”