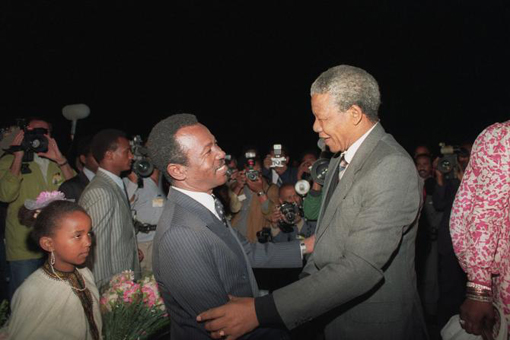 In an exclusive interview with VOA Zimbabwe, Shava said:

We are not harboring Mr. Menguistu, we have allowed Mr. Mengistu to stay in Zimbabwe since he fell out with his people in Ethiopia. It was not a conspiracy, everybody knew he was coming here with his family, and there is no comparison with what you are asking about (Mpiranya).

This marks a shift in policy after Zimbabwe’s late former Information Minister, Tichaona Jokonya, told VOA in 2009 that Harare was not going to extradite Mengistu.

Jokonya said Mengistu came to Zimbabwe as a fugitive, as a refugee, and under the United Nations convention, a refugee is protected in the country he flies to.

Mengistu was sentenced to death in 2008 in absentia after fleeing to Zimbabwe in 1991 following his ouster. He was charged with genocide, homicide, illegal imprisonment and property seizures.

This comes amid accusations that Zimbabwe was also harbouring a Rwandan national, Protais Mpiranya who was wanted for his alleged involvement in the 1994 genocide.

Protais Mpiranya was head of Rwandan president Juvénal Habyarimana’s presidential guard and was accused of ordering the murder of the then-Prime Minister, Agathe Uwilingiyimana.

Shava told VOA that Harare had “fully co-operated with the UN Residual Mechanism in its investigations” to find Mpiranya who was charged in 2000 by the International Criminal Court for his role in the 1994 Rwandan genocide.

He said Harare was not aware that Mpiranya was in the country until after he was found dead by a United Nations team tracking him down.

He promised that the country will investigate how Mpiranya was able to evade capture in the country until his death in 2006.

2 comments on ““We’re Not Harbouring Mengistu, We Allowed Him To Stay,” – Zimbabwe”