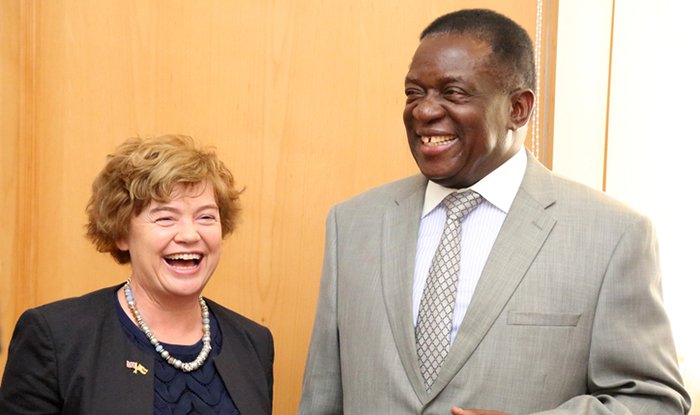 Former British ambassador to Zimbabwe, Catriona Laing has been criticised by the United Kingdom Parliament for allegedly giving London misleading reports that portrayed President Emmerson Mnangagwa as a “reformist”.

Laing is accused of having been too close to the ruling ZANU PF party, resulting in her failing to expose alleged human rights abuses perpetrated by Mnangagwa’s administration.

Laing was the UK ambassador to Zimbabwe from 2014 to 2018, and she oversaw Zimbabwe’s transition from the late former President Robert Mugabe who was ousted in 2017.

Last week, UK lawmakers in the House of Lords said Laing’s links with ZANU PF resulted in her misleading the British public into believing that Mnangagwa was a reformist.

Laing, who is now UK’s top diplomat in Nigeria, was also accused of failing to give reports on the real situation on the ground in Zimbabwe ahead of the coup in 2017 and the 2018 elections.

While contributing to debate in the House of Lords, British MPs said they were surprised that Laing was mum about human rights abuses, corruption and other vices committed by Mnangagwa’s administration.

Kate Hoey, MP in the House of Lords said in 2018 they visited Zimbabwe together with other lawmakers ahead of the 2018 elections and learnt of Laing’s close links to the ruling ZANU PF party. Hoey said:

In 2018, just before the last presidential election I, along with the Right Honourable Conor Burns, visited Zimbabwe to write a report for the UK branch of Commonwealth Parliamentary Association on the possibilities of a free and fair election and the chances of Zimbabwe rejoining the Commonwealth.

We did not put Zimbabwe out, of course… It was a depressing report. The Zimbabwean Electoral Commission (Zec) was not impartial and the voters roll was inadequate, for starters. The Constitution was being ignored, so we wrote of our disappointment and surprise that our ambassador at that time seemed to be so close to the ruling Zanu PF party.

I have to say that the current ambassador (Mrs Melanie Robson) is doing a great job and is widely respected.

She said they sounded a warning that Mnangagwa was not a reformist and was likely to perpetuate Mugabe’s heavy-handedness but they were dismissed by some as needlessly pessimistic and lacking understanding of his desire to change.

She said Zimbabwe was still being afflicted by the same issues of corruption, greed and violent oppression.

In 2018, Laing denied Hoey and Burns’ allegations that she showed bias towards Mnangagwa and mocked the then MDC Alliance leader Nelson Chamisa in the run-up to the elections.