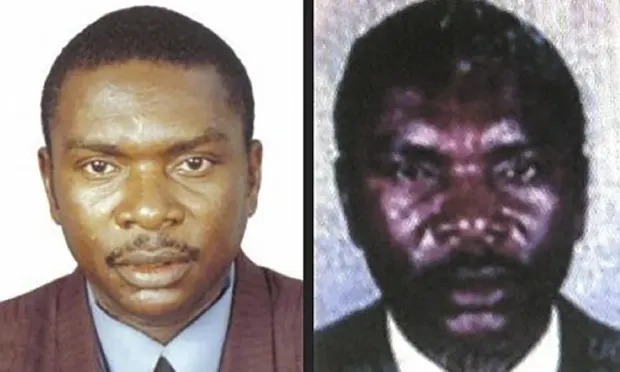 A composite picture of Protais Mpiranya who had been on the run for more than two decades. Photograph: MICT/AFP/Getty

Full statement by the Minister of Foreign Affairs and International, Fredrick Shava, on the Rwandese fugitive Protais Mpiranya who died in Zimbabwe and was buried at Granville Mbudzi Cemetery in Harare.

The Government of Zimbabwe wishes to clarify some recent media reports that are circulating insinuating that the Government was harbouring the most wanted Rwandese fugitive, Protais Mpiranya, whose remains were allegedly found in Zimbabwe under the alias Ndume Sambao.

The Government of Zimbabwe wishes to put on record that it met all its obligations under international law.

Zimbabwe fully cooperated with the UN Residual Mechanism in its investigations of the Rwandese fugitive who was indicted in 2000 by the International Criminal Tribunal for his role in the 1994 Rwandan genocide.

From day one, Zimbabwe cooperated fully with the investigation team.

Actually, the office of the UN Prosecutor responsible for tracking Rwandan fugitives and the Zimbabwean authorities established a joint task force to coordinate investigative activities and strengthen cooperation.

The Zimbabwean authorities have consistently cooperated and adhered to the country’s international legal obligations.

Zimbabwe actually took the following concrete and positive steps to facilitate the investigation of the whereabouts of Mpiranya:

1) Set up an Inter-Departmental Taskforce, with the mandate to investigate, chaired by the Ministry of Foreign Affairs and International Trade.

2) Worked with the representative of the Office of the UN Prosecutor.

3) Provided resources to fund the investigations of the activities of the Task Force.

4) Comprehensively investigated leads on fugitive Mpiranya and followed up on new leads.

5) Facilitated a visit to Zimbabwe by the UN Prosecutor and his meetings with the two Vice Presidents of Zimbabwe.

6) Shared the stage by stage investigation reports, summaries of interviews with suspects and documentary evidence from various sources.

7) Produced and submitted Task Force reports to the Office of the UN Prosecutor.

Furthermore, it was the Government of Zimbabwe that authorised and participated in the exhumation of Mpiranya’s remains when it was suspected that he was the one buried under a false name, Ndume Sambao.

The government actually secured the grave and issued certificates to authorise the extraction of DNA samples and for them to be taken outside the country to the Netherlands Forensic Institute for analysis.

The Task Force, including government pathologists and forensic experts, participated during the whole process.

It was not possible for the UN Prosecutor’s Office to come, exhume and take the samples of a deceased person buried in Zimbabwe without government authority.

We were not only cooperating and assisting the UN Mechanism but we are also assisting Rwanda bilaterally and requests for extradition of some fugitives allegedly believed to be in Zimbabwe are at various stages of processing.

Contrary to the smear campaign peddled by both international mainstream media and social media seeking to portray Zimbabwe as aiding, abetting and hiding a fugitive, the government of Zimbabwe actually assisted the UN Prosecutor in the identification of Mpiranya.

As the facts above can confirm, Zimbabwe was always there to assist throughout the whole process.

Under the Second Republic’s engagement and re-engagement policy, we agreed to cooperate with them as we had nothing to hide.

As the government, we fulfilled our international obligations under the UN Charter by giving the UN team unlimited access to the grave and protecting it.

Zimbabwe is a member of the UN system that always respects and abides by international law.

As a law-abiding nation, Zimbabwe will never harbour criminals and welcomes the findings from the DNA samples extracted from the fugitive.

This outcome closes a sad chapter in the history of Rwanda and allows the country to move on.