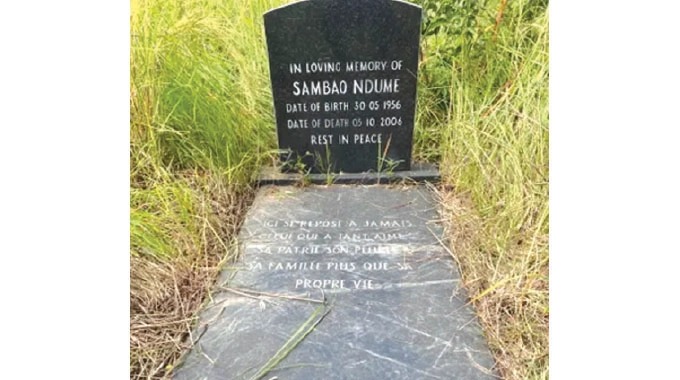 United Nations investigators who took samples from the remains of the late Rwandan genocidaire, Protais Mpiranya, at Granville Cemetery (Mbudzi) in Harare left the grave undisturbed according to a report.

The UN pathologist, who was accompanied by UN officials, and three local detectives, among other Zimbabwe Republic Police (ZRP) officers at the gravesite, only took a sample, without disturbing the rest of the remains, reported The Herald.

Mpiranya’s remains were exhumed last month and his identity was then confirmed by DNA analysis on Tuesday.

His grave was located at Mbudzi Cemetery in Harare by UN investigators with the help of a critical lead found on a confiscated computer: the hand-drawn design of Mpiranya’s tombstone.

Mpiranya died in Harare in October 2006 of a heart attack brought on by tuberculosis, at the age of 50.

He had been living in Zimbabwe using false names for four years before his death.

The French inscription on the tombstone read: “Here rests forever one who loved his fatherland, his people and his family, more than his own life.”

He was buried under a false name, Sambao Ndume whose date of birth matched his, 30 May 1956.

Mpiranya was the head of the Rwandan presidential guard in 1994 when the genocide that killed up to 800 000 Tutsis and moderate Hutus occurred.

He allegedly gave his men a kill list of prominent Tutsis and orders to kill their families too.

He armed and trained the notorious Interahamwe Hutu militia, responsible for hundreds of thousands of deaths.

When the plane carrying the country’s president, Juvénal Habyarimana, was shot down in Kigali on 5 April 1994, Mpiranya sent his men to set up roadblocks at which Tutsis were massacred.

Soldiers from the presidential guard murdered the prime minister Agathe Uwilingiyimana, a moderate Hutu, and mutilated her body.

Mpiranya’s men also shot the 10 lightly armed Belgian soldiers who had been sent to protect Uwilingiyimana and hacked them to death with machetes.

When the Hutu regime collapsed in July 1994, Mpiranya fled across Africa, spending four years in Cameroon before moving to the Democratic Republic of Congo (DRC).

In DRC, Mpiranya, with Hutu forces under his command, fought alongside Zimbabwean troops on behalf of the country’s president Laurent Kabila, against the Rwandan army.

In 2002, Mpiranya was reportedly flown from Mbuji-Mayi in central DRC to Harare on a Zimbabwean military plane.

Using a fake identity, he started a transport business in Zimbabwe likely with proceeds from Congolese diamonds but both his buses were involved in accidents and there was no money to repair them. Reported The Guardian:

Much of the rest of his assets were wiped out by Zimbabwean high inflation in those years.

When Mpiranya fell sick with tuberculosis, he had no money left to pay for his medical care and his wife in the UK had to take on more work to send funds.

Filling in the forms for hospital admission, he used a new identity, Sambao Ndume, the name he would be buried under.