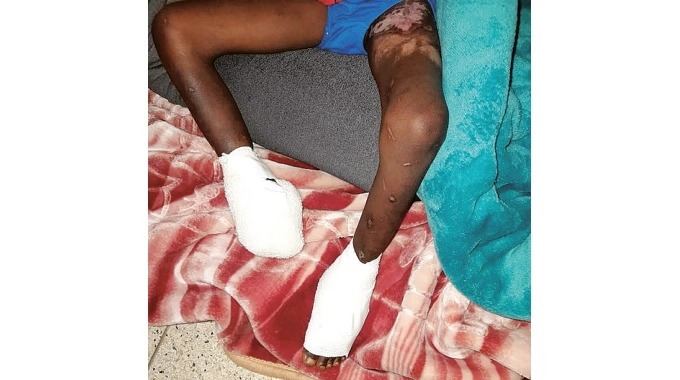 Diego has been moved to a more secure bed and guards that man the entrance to the children’s hospital now restrict access to him.

Only “close and trusted relatives” are now allowed to see the child.

The safety of the child is of paramount importance. He suffered terrible and life-threatening injuries.

We don’t know who harmed the child and we thought it’s better to be safe because the person or persons responsible may want to come back and finish the job.

The child is a key witness in his own case and he knows who harmed him. So, we are not taking chances.

Police are still investigating the case and as a hospital, we are just playing our part.

The child’s mother, Maritha Ndlovu, who is Mahachi’s ex-wife said the police has also stopped her from receiving food and drinks from visitors. She said:

At first, we used to get nice food from relatives who are here every day including Mahachi’s sisters who visit daily, and my mother.

But police have since said I must not accept food from anyone because my son is the main witness in his case. They fear that he can be poisoned.

He loves Chicken Inn. If it was up to him, he could eat it every day.

At times he helps me eat the food I buy from the caravans outside the hospital.

Eating together has helped us deepen the bond we already have.

The hospital authorities told me that they moved us to another bed for security reasons.

They said there were some people who came, claiming to be doctors and demanded to examine my son.

I am also told some lawyers that were claiming to have been sent by Mahachi wanted to see us. The hospital turned them away.

Mahachi, who is based in South Africa, is alleged to have poured boiling water all over his son’s body before smuggling him back to Zimbabwe.

He, however, says he is innocent and has instead, blames family members and the mother of the child for the boy’s injuries.