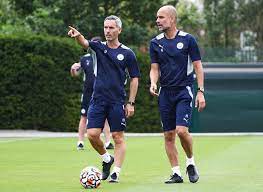 Manchester City first-team coach Carlos Vicens will be leaving the club to take over as Dutch club Heracles Almelo’s head coach in the summer of 2022. He signs a contract that runs through 2024.

Manchester City manager Pep Guardiola had promoted Carlos Vicens – who was the U18s head coach at the time – to his first-team set-up last summer, to primarily work on set-pieces and to provide a link to the academy.

We are pleased to present Carlos as the new head coach. With Carlos we are bringing in a trainer who stands for attacking and well-groomed football from a clear organization.

In the many conversations we got to know Carlos as a passionate and ambitious trainer. We have tested his ideas about playing style, team development, intensity and developing individual players against our vision and this is a good match. Ultimately, we think we have a head coach in Carlos who fits well with our club and who pursues the same ambitions: playing attractive football, developing players and competing for places six to ten in the Eredivisie

Carlos Vicens who has been working with City since 2017 went through the youth academy of Real Mallorca as a player and started his coaching career at a young age.

Because Heracles Almelo and Manchester City are in an important phase of the season, Vicens will be officially presented in Almelo after the current season.