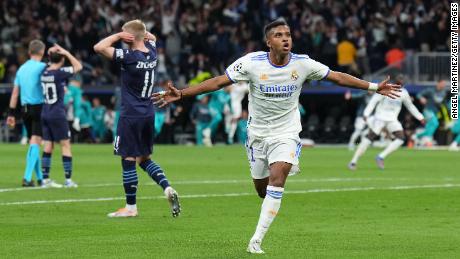 Manchester City have crashed out of the UEFA Champions League following their 3-1 loss to Real Madrid last night.

Manchester City went into last night’s match with a goal advantage after beating the Whites 4-3 at Etihad in the first leg.

They also took the lead last night through Riyad Mahrez’s second-half strike to make it 5-3 on aggregate.

Real Madrid responded in the 90+1 minute with a strike from Brazilian youngster, Rodryigo to make it 5-4 on aggregate. The Samba boy headed in his second goal of the night about four minutes later to send the match to extra time.

The hosts were given a penalty after Manchester City defensive midfielder, Rodri had fouled Madrid captain, Benzema inside the box. The French international converted from the spot to dump the 2020 finalists out of the prestigious competition.

Meanwhile, some have started to link Pep Guardiola’s perennial failure to clinch the Uefa Champions League trophy, albeit having one of the best teams in Europe, to a “curse” that was pronounced in 2018 by Yaya Toure’s agent, Dimtriy Seluk.

Responding to Guardiola freezing Toure out of the Manchester City team, Seluk said:

Pep turned all Africa against himself. I’m sure that many African shamans in the future won’t allow Guardiola to win the Champions League. This will be for Guardiola an African curse. Life will show whether I am right or not.

Guardiola had a sour relationship with Toure at Manchester City after the African former player accused the Spanish coach of being a racist after freezing him out of the Barcelona team earlier.

Real Madrid will now face Liverpool in the final to be played in Paris, France.