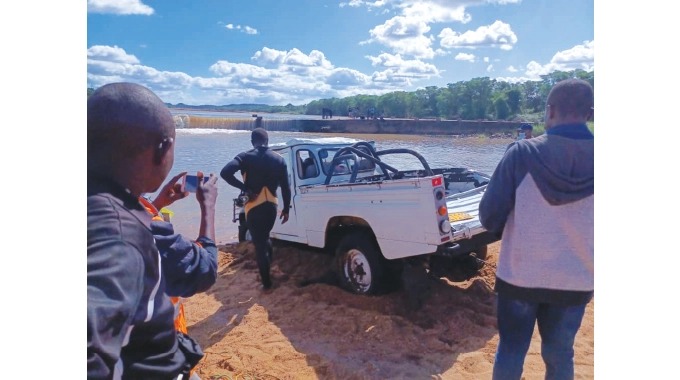 The vehicle believed to belong to telecoms giant NetOne being pulled out of Runde River by villagers and police. Two occupants were found dead inside the vehicle that plunged into the river (Image: The Herald).

A NetOne vehicle that was recently swept away by a flood at Chilonga Bridge, Runde River, was being driven by an employee of the company who was travelling with an alleged lover, a report claims.

The Mirror reported sources as saying the deceased NetOne employee was Samson Zvarimwa (48), who was employed as an engineer.

Zvarimwa worked at NetOne, Balmain Building in Masvingo and stayed in the Runyararo North West suburb.

The other occupant of the vehicle was a woman who was not employed by NetOne.

The passenger was Loice Maradze (40) who was a money changer in Masvingo, according to the report.

Maradze reportedly operated next to Pick and Pay Supermarket.

NetOne spokesperson, Roselyn Chisvetu, confirmed the death of Zvarimwa and said the company would issue a statement in due course.

Zvarimwa and Maradze reportedly travelled together from Masvingo to Chiredzi South, a journey of more than 200km.

The tragic incident occurred as they were coming back from Chilonga after filling a diesel-powered generator at a mobile base station in the area.

They used a longer route to Chilonga through Mupapa which is safe from floods but decided to use the shorter route assuming that the water level at the bridge had subsided.

The deceased were found trapped inside the car after villagers used a rope to pull the vehicle out of the flooded Runde River.

Zvarimwa is survived by his wife, Diana and 2 children.

Mandebvu, however, said that she did not know the woman who was in the company of her brother.