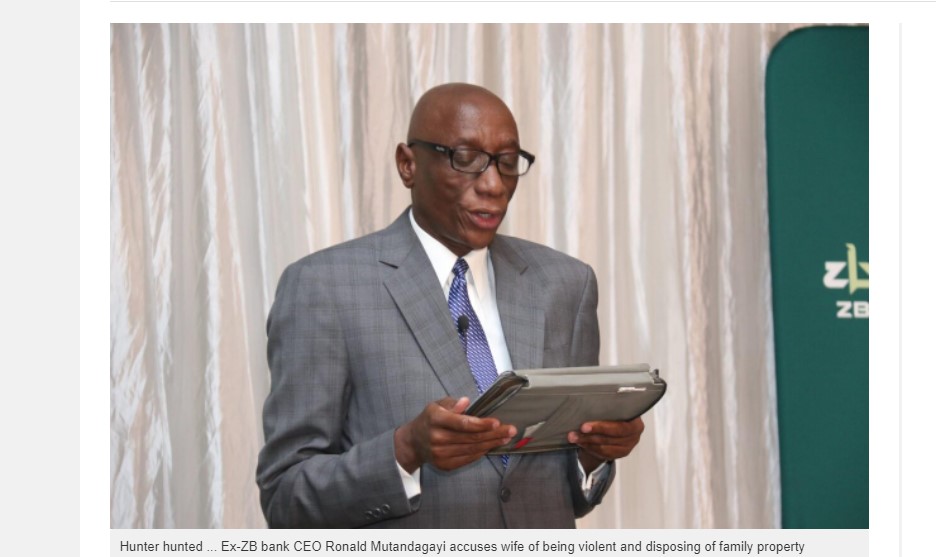 A former ZB bank CEO, Ronald Mutandagayi, who was filmed assaulting his wife last year has approached the courts claiming that his wife assaulted him with a wooden spoon.

Loveness Mutandagayi, 48, on Tuesday appeared before Harare magistrate Tafadzwa Mhiti accused of assault and disposing of family property worth US$105,000 without her husband’s knowledge.

She was remanded to May 17 on free bail.

The former banker has taken his wife to the police accusing her of being violent to a point he moved out of their home.

Loveness is also being charged with two counts of unreasonable disposal of the couple’s property between January 14 and 28 this year which is worth US$10,000. Reads the state outline:

She was taking advantage of her husband’s short sight but didn’t realise that he can see, depending on size of objects and items.

The couple’s domestic worker confirmed to Mutandagayi that his wife had disposed of several pieces of household property.

The assault charge arose after Loveness allegedly bashed Mutandagayi with a wooden spoon during a row over a missing car steering wheel.

The court heard Loveness violently attacked Mutandagayi who resultantly left the house. She allegedly continued the attack outside the house as Mutandagayi was attempting to jump into a taxi.

The court heard Loveness also poured juice on her husband as he sat in the taxi while kicking him and threatening to damage the vehicle.

Mutandagayi retreated back to the house and locked himself inside. Loveness allegedly broke the screen door in an attempt to reach Mutandagayi.

The attack was filmed by one Samantha Mamvura, allegedly on the orders of Loveness.

Mutandagayi left the family home after the incident. It is alleged that Loveness took advantage of his absence and disposed of more household property worth US$95,000.

Ronald Mutandagayi lost his job in May last year after a video of him assaulting his wife in front of a child went viral on the internet.

She did not press criminal charges against the 59-year-old.