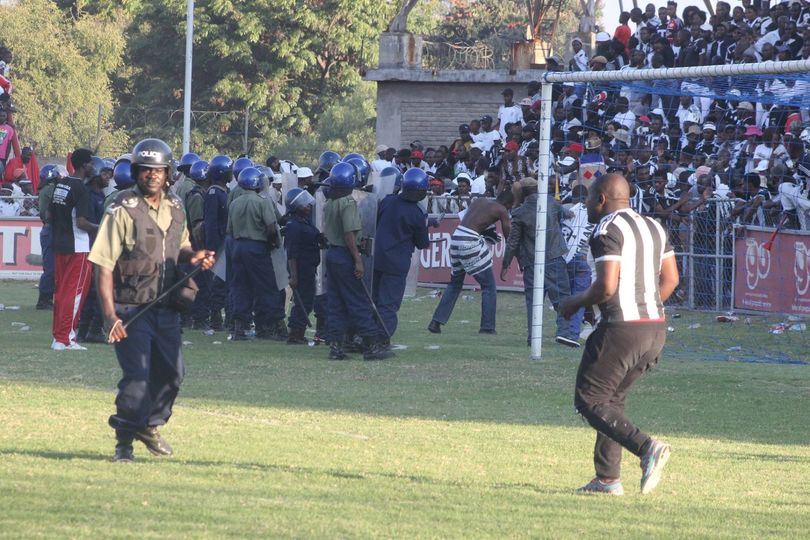 The Castle Premier Soccer League (PSL) has said it is awaiting a report from the Zimbabwe Republic Police (ZRP) to institute disciplinary action following the violent scenes that marred the match between FC Platinum and Highlanders on Saturday.

The incident occurred when referee Kuzivakwamwari Jaravaza awarded the Zvishavane-based league championship holders a penalty in the 82nd minute, after Peter Muduwa was adjudged to have fouled Walter Musona in the box.

Highlanders players protested the decision and their fans responded by invading the pitch targeting one of the assistant referees.

Police details were quickly deployed and fired teargas to disperse the crowd.

The battles continued outside the ground, while the players and officials sought refuge in the dressing rooms.

The match commissioner was then forced to end the game before full-time.

In a statement, the PSL said it is waiting to receive a report on the issue from the ZRP. The statement reads:

The Premier Soccer League has received match reports from FC Platinum and Highlanders FC following incidents of crowd trouble that occurred during a Castle Lager PSL match on 23 April 2022 at Mandava Stadium.

We are currently awaiting a report from the Zimbabwe Republic Police before commencing disciplinary procedures.

The PSL is concerned about acts of violence and hooliganism in football and is currently engaging all relevant stakeholders to find a lasting solution.

We urge clubs to engage their supporters to refrain from breaching PSL Rules and Regulations to ensure safety at football matches. Fans should be aware that the referee’s decision is final. Encroaching onto the pitch before, during and after a match is an offence that results in a serious punishment for clubs.

While we do not condone violence, we would like to note that we have received numerous complaints regarding the performance of match officials at PSL matches and we implore the ZIFA Referees Committee to seriously look into the matter.