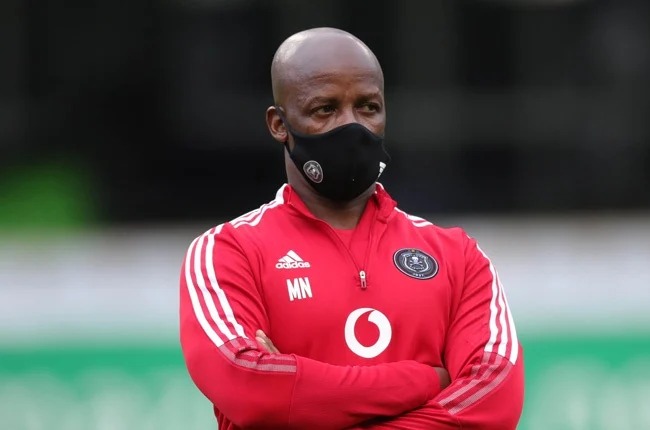 Simba got the only goal of the match through a second-half penalty converted by Tanzanian international Shomari Kapombe.

Ncikazi alleged that they were ill-treated by their hosts throughout their stay in Dar es Salaam. Speaking after the match, Ncikazi said:

Firstly, congratulations to the opponents. But let’s speak the truth, I don’t think we deserved to lose. One, as Africans, let’s change this mentality that when opponents come to Tanzania you are so hostile to them that you treat them like animals.

It’s so inhumane, everywhere we go, we’re treated so badly. This is a game of sport that should unite us but what you get here is hostility and the abuse.

Secondly, the rules are saying that we are going to use VAR, but VAR was not used today. Go check, the penalty that Simba got is not a penalty because our defender got to the ball first.

Secondly, (Siphesihle) Ndlovu our player, before Simba got a penalty, we had a penalty, but it was not given.

The referee didn’t have the decency to go and check the VAR. All of a sudden, the VAR was switched off.

But why do Africans do this to other Africans? Do you really think that the hostility that we get when we come here when Simba comes to South Africa should we treat them that way? Is that what you expect?

And all of you here (Tanzania media) are going to lie and write lies, write the truth, Simba did not deserve to win.

The treatment that we got from the stadium, from the hotel, from the airport, why do you do this as Africans to other Africans?

Are we going to improve the football in our continent, and you are all proud that Simba won?

They did not win, the referee made them win. You should be ashamed of yourselves as Africans.

But listen to this, we’re going to treat Simba with decency when they come, we are going to show them what it is to be a true African by giving them the best hospitality and treat them like human beings.

You don’t treat visitors the way we get treated here and you should all be ashamed. We did not deserve to lose, the officials caused us to lose.

In a statement issued this Monday, 19 April 2022, Simba Sports Club Chief Executive Officer Barbara Gonzalez warned Ncikazi to be mindful of his words and to never cross the line again. Below is the statement by Gonzalez in full:

Simba Sports Club is deeply disappointed with the defamatory remarks made by the Orlando Pirates co-coach Mandla Ncikazi after their CAFCC quarterfinal defeat against us on Sunday, 17th April 2022.

We vehemently condemn the unprofessionalism and unethical behaviour exhibited by Coach Ncikazi through his remarks.

As the host team, we will never tolerate any slander of that kind to our Country and to our Club. As Tanzanians, we pride ourselves on providing a safe and secure environment for all activities and ensuring a high stand of service is provided to all our guests.

As their opponents, we were deeply puzzled by the strange behaviour of Orlando Pirates since their arrival in Tanzania.

All gestures that were friendly accorded to them were openly denied, starting with the vehicles provided for their logistics in Tanzania, and the suggested hotels in close proximity to the stadium so as to accord them with a comfortable and friendly environment ahead of the match.

In addition to the above, Orlando Pirates arrived over an hour late to the official training session set by CAF, yet stadium officials were kind to accommodate them, despite their deliberate choice to stay a far distance from the stadium (out of town).

Most strangely, the peculiar decision to use an unofficial entry into the stadium dressing rooms via the media room.

This is not how mega-clubs conduct themselves, and for that, they must accept all responsibility for their own actions that resulted in the poor choices they made since their arrival in Tanzania despite receiving prior friendly advice from Simba.

South Africa and Tanzania have deep historical ties that perhaps Coach Ncikazi was unaware of. One of the first external missions of the ANC during the apartheid struggle was in Morogoro, Tanzania.

The disturbingly insensitive remarks made by the Coach erode the brotherhood of our two countries by deliberately defaming Simba and the entire nation, knowing we went beyond the statutory duties to accord his team a friendly environment ahead of the match.

Mean-spirited comments from Coach Ncikazi are highly detrimental to the progress of African football as we know it.

Playing by the written rules is mandatory, however, respecting the unwritten ones is a must. Fair play requires unconditional respect for opponents and fellow players. This is something Coach Ncikazi failed to accord us with.

As seasoned football administrators, we understand the tactics of modern-day football pre and post-performance propaganda (mind games) on the outcome of the match.

The intention to garner sympathy from football stakeholders as a buffer for poor results is distasteful, however, what coach Ncikazi did was beyond crossing a very dangerous line.

Everyone has the right to have their dignity respected and protected, but what Coach Ncikazi did was a clear infringement of this by sharing baseless remarks with the intention to tarnish the good image of Simba and Tanzania.

As a result of false and defamatory allegations made by Coach Ncikazi, Simba will file a formal complaint to CAF and through the diplomatic channels to address the severity of what was alluded to.

The indirect threats to our safety and security are not to be dismissed, and should anything happen to Simba during our stay, we will understand the route of any incident.

Football is all about mutual respect, and we Simba have a zero-tolerance policy for disrespect of any kind.

Must learn to be mindful of our words, and the lasting consequences they have on our communities.

Let this be a teachable moment never to cross these lines again.