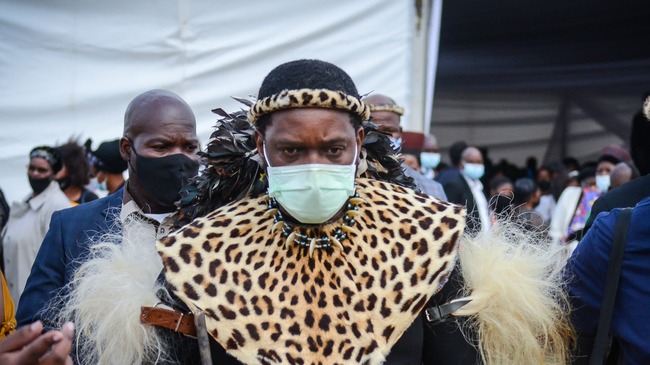 AmaZulu King MisuZulu KaZwelithini said he was shocked by the extent of the damage caused by the heavy rains that induced floods and mudslides in KwaZulu-Natal Province.

The king visited the area of Tshelimnyama, west of Durban, with billionaire businessman Patrice Motsepe and KZN Premier Sihle Zikalala.

The AmaZulu King expressed shock over the scale of the devastation caused by the floods and also thanked the Motsepe Foundation for its financial donation to people affected by the natural disaster. He said:

We are all shocked by the storms. We are in pain. As we speak, there are still missing people.

These rains showed us that it has damaged a lot of infrastructure, and even businesses have been affected.

However, I am happy that Motsepe Foundation has come on board to help us.

It is not the first time the foundation reaching out to us.

We came here today to make a humble donation of R30 million from the Motsepe Foundation to help our people.

There was a meeting that took place earlier and after that we visited many places in the province and you can see that many of our people are suffering because of the way the flood has impacted and affected their lives.

Nearly 400 people have been confirmed dead following the floods, with thousands more displaced after their homes were washed away by flash floods and mudslides.

The Department of Human Settlements said around 4 000 homes have been completely destroyed by the floods in KZN, with Tshelimnyama having been one of the areas most affected.