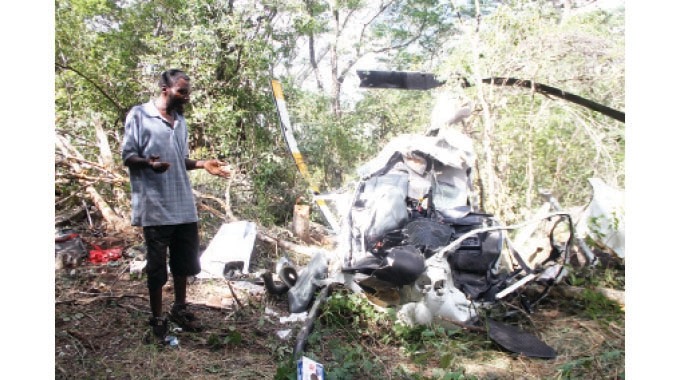 Elson Mangani, the eyewitness, narrates how the R44 Helicopter crashed at Lothin Farm in Mhondoro on Sunday. – Picture: Edward Zvemisha.

The Zimbabwe Republic Police (ZRP) has confirmed a helicopter crash that occurred in the Mhondoro area on Sunday afternoon, killing the pilot on the spot.

The plane came down in Lothin Farm popularly known as kwaJojo in Mhondoro-Chivero, less than 100 metres from a homestead.

Eyewitnesses who spoke to The Herald said the helicopter was flying low from the Mupfure River direction, heading towards Harare, before it crashed on a mountain. Musekiwa Mapunde said:

It seemed as if the pilot wanted to fly past trees in the mountain but failed, resulting in the helicopter hitting a tree branch and within seconds, we heard a loud bang.

The sound of the helicopter was just like that of small planes. I then rushed from my homestead as the helicopter had crashed near my neighbour’s compound.

We then discovered that the helicopter had crashed with wreckage all over the place, we tried to save the life of the pilot, but it was too late as he was dead.

Within minutes, a neighbourhood officer arrived and managed to get in touch with the police who then attended the scene.

Another eyewitness, Elson Mangani, whose homestead is the nearest to the crash scene, said he could tell the plane was flying low by its sound. He said:

I was inside my house and only heard the sound of the helicopter which was clear that it was flying low.

I was not taken aback since planes usually pass through the area. There was my son outside who witnessed the plane crashing and shouted while seeking protection.

At that moment I then rushed outside only to witness pieces of the helicopter hanging on trees in the mountain and its sound when crashing.

Reports indicate that the private helicopter was the same plane that ferried comedienne Mai TT to her wedding in Chisipite, Harare on Saturday.