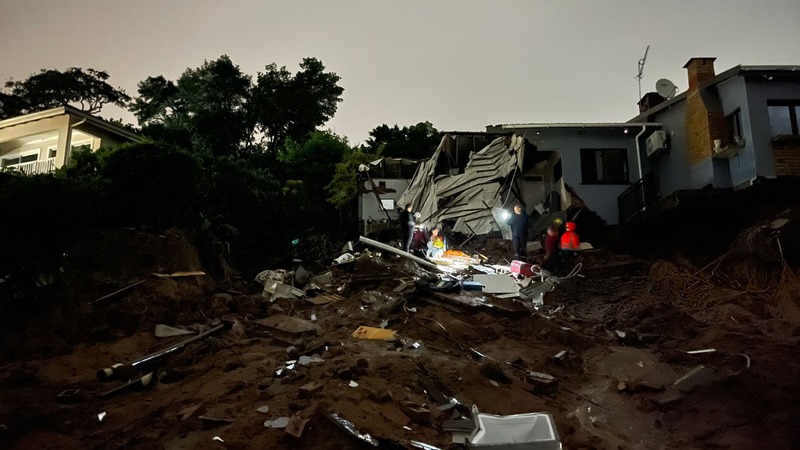 A woman was killed after her house collapsed due to a landslide. Picture: Medi Response KZN

She said police have not yet reached some areas and therefore the number of casualties may rise as the day progresses.

Ndlovu urged residents to stay indoors and avoid crossing flooded bridges if they need to leave home. She said:

The are definitely no-go areas. Don’t try to navigate through any heavy amounts of water.

If you are in danger, please get to safety and contact your local area leadership.

The South African Weather Service (SAWS) has forecasted more rainfall for most of Tuesday. SAWS said in a notice:

A Cut-Off Low-pressure system is situated over the eastern parts of the country and a surface low is to the east along the KZN coast, advecting low-level moisture and resulting in scattered showers and rain over the south-eastern parts of KZN tomorrow (today).

Significant amounts of rainfall have already been received in most places along the south coast and more rain is still expected to fall tonight and tomorrow.

The soil is already saturated and some drainage systems are already full, so widespread flooding can be expected to continue tonight into tomorrow over the south-eastern parts of KZN.