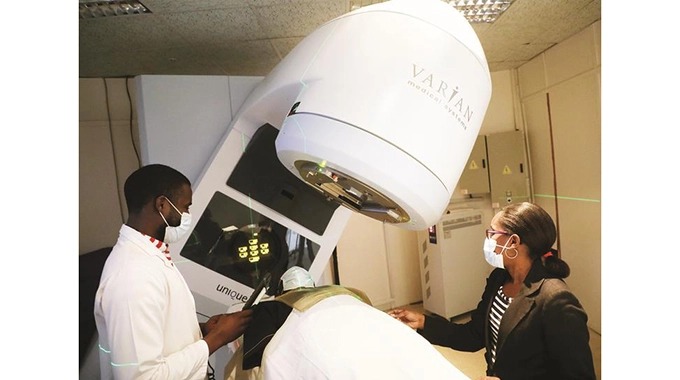 A radiographer at one of the country’s major hospitals Adriana Rutendo Mafukidze Zanga said that linear accelerators (devices most commonly used for external beam radiation treatments for patients with cancer) at government hospitals are not working.

Posting on Twitter on Saturday, Zanga said the last functioning linear accelerator (linac) broke down in January when there was already a huge backlog due to previous long machine downtimes. She wrote:

Thank you. My fellow radiation therapists and I are hoping for the repair of ALL the linear accelerators (linac) at both govt institutions.

Before the last functioning linac broke down in January we already had a huge backlog due to previous long machine downtimes.

There have been conflicting claims on social media platforms about the state of cancer treatment in Zimbabwe.

There are real people with names who are dying daily because Mnangagwa’s regime has refused to care about cancer patients due to LOOTING.

However, pro-Government activists on Twitter have accused Chin’ono of lying and making unfounded and meant to tarnish the image of the country.

In a post on Facebook on 27 January this year, Zanga said asked a rhetorical question. She said:

Is a DOG in Alabama more likely to receive Radiotherapy than our children with cancer in Harare?!!!!!

In another post the following day, Zanga said the country needs lasting solutions to the frequent breakdowns of cancer machines.

She also implored churches, universities, healthcare funders, civil society, everyone across the political divide, banks, and philanthropists, among other stakeholders to work together to find a solution to the crisis. She said:

In my post yesterday when I posed the question, “Is a dog in Alabama more likely to receive Radiotherapy than our children in Harare”, something in me snapped.

As a mother myself, I did not want to imagine what it feels like to be stuck with a child with cancer at home due to a machine breakdown.

I hence decided that as a citizen and a cancer caregiver I cannot keep on venting without offering solutions.

As a cancer caregiver, I am also tired of being heartbroken by these episodes that I have experienced for the 12 years I have served my community.

This must be everyone’s concern – churches, universities, healthcare funders, civil society, everyone across the political divide, banks, philanthropists etc.

1. As individuals and corporates we have been doing well to raise cancer awareness through walks etc. This year’s theme for World Cancer Day is “Close the care gap”.

It is therefore my humble request for corporates and individuals to organise around this theme. Let’s talk about access to Radiotherapy, Chemotherapy, Surgery, Counseling, Nutrition etc for cancer patients this year.

Try to actively seek out where the gaps in cancer care are and seek ways to close these.

Public Relations Officers in public sector hospitals are able to assist with information as well as guidance in initiatives you may want to engage in.

A tour of the Radiotherapy and Oncology facilities can be requested.

2. The proposed cancer levy motioned in parliament by Dr Khupe did not sail through due to reasons I do not have the full knowledge and expertise to fully explain BUT according to Dr Ngwaru in the Herald article titled “Parly mulls cancer levy” he says, “As it stands about 50 per cent of cancer diseases are an overlap from HIV. What it means is that the burden of cancer must be the burden of HIV.”

I agree with the above statement by Dr Ngwaru of the National Cancer Alliance of Zimbabwe (NCAZ).

What can be done for our Radiotherapy Centres to benefit from the AIDS levy? Can a cancer council be set up which is directly funded by the National AIDS Council?  If this is not feasible/practical please offer suggestions.

3. There is a growing sentiment that Radiotherapy and Oncology Centres must stand alone and be funded directly by Treasury because of the high cost of purchase and maintenance of linear accelerators which may exceed hospital and Ministry budgets.