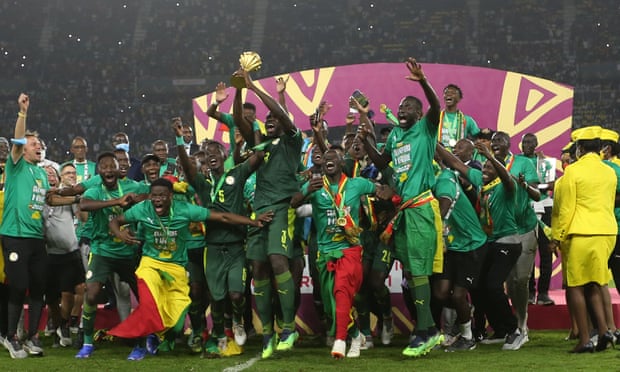 Senegal celebrate winning the Africa Cup of Nations for the first time after their victory over Egypt. Photograph: BackpagePix//Shutterstock

Senegal won the Africa Cup of Nations (AFCON) trophy for the first time after beating seven-time champions Egypt 4-2 on penalties in Cameroon on Sunday night.

The match had ended 0-0 after 120 minutes, with Senegal missing chance after chance including a first-half penalty miss by Sadio Mane.

South African referee Victor Gomes pointed to the spot after Saliou Ciss was chopped down by Mohamed Abdelmonem.

Mane drilled his shot slightly to Abou Gabal’s right, but apparently, Mohamed Salah, Mané’s Liverpool teammate, had told him which way to dive.

It seemed Egypt had the upper hand going into the penalty shootout as Senegal had twice lost in the finals before while the former had won their last six shootouts.

Abou Gabal had already saved five penalties in the tournament.

Abdelmonem’s penalty kick pinged off the inside of the post but Senegal’s advantage was immediately cancelled out as Bouna Sarr’s effort was saved by Abou Gabal.

But when Édouard Mendy saved from Mohanad Lasheen, suddenly the advantage was back with Senegal and it was all down to Mané.

The Liverpool forward, who had converted one late against Zimbabwe in the group stage, drilled his shot low and extremely hard to his left and Abou Gabal could not get down.

And, Kalidou Koulibaly became the first Senegalese player ever to lift the trophy.