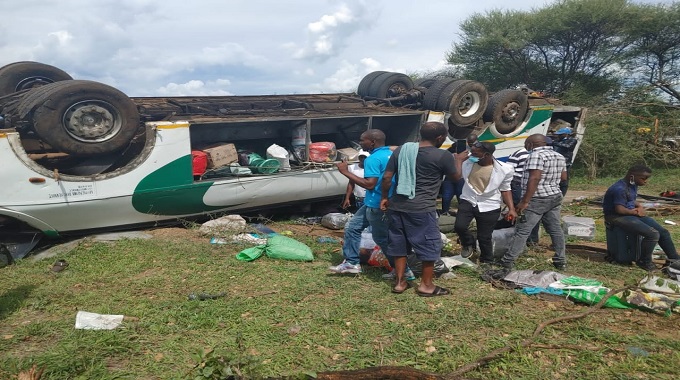 A Harare-bound Munhenzva cross-border bus was involved in an accident along the Beitbridge – Masvingo road on 23 December 2021. (Picture Credit: Chronicle)

A Harare-bound Munhenzva cross-border bus was involved in an accident near the Matshiloni area along the Beitbridge – Masvingo road on Thursday afternoon.

One person died while 15 others were injured, eight of them seriously. The deceased was a bus crew member.

The bus, which was carrying 29 Zimbabweans returning from South Africa, burst a tyre, overturned and landed on its roof.

The injured were taken to Beitbridge District Hospital for medical attention, while the deceased was taken to a mortuary at the same hospital.

The accident occurred around 2 pm on Thursday when the bus burst one of its tyres and landed on its roof.

As a result, 15 people were injured, eight of them seriously, while seven incurred minor injuries.

At the same time, we want to urge bus operators to always observe curfew hours to ensure the safety of their passengers considering that we are recording a surge in armed robberies beyond curfew hours.