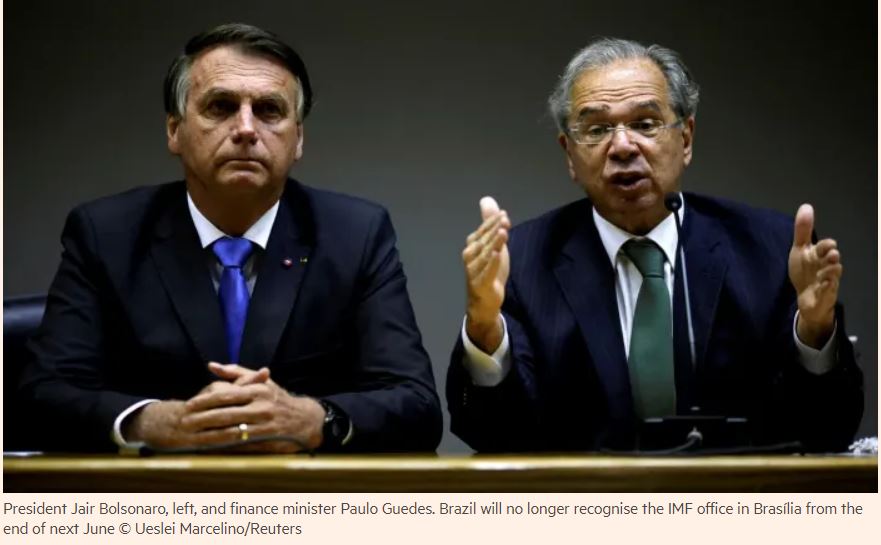 The Brazilian government is expelling the International Monetary Fund (IMF)’s representative office in the country after complaints about the institution’s economic forecasts.

It has been years since they were needed here. They stayed because they like feijoada [black bean and meat stew], football, good conversation and, from time to time, to criticise and make wrong predictions.

From June 30 — when the current IMF representative is due to be replaced — Brazil will no longer recognise the institution’s office in Brasília.

The fund said it had agreed to close the office by that date.

The decision follows growing criticism from Guedes over the IMF’s forecasting in recent years, particularly last year during the height of the pandemic.

He cited the fund’s estimate of a 9 per cent contraction in gross domestic product last year, which was considerably worse than the 4 per cent drop officially reported by the government. Said Guedes:

If they want, they can keep their office, but we’re officially saying we don’t need to have them here anymore.

A former fund manager from Rio de Janeiro, Guedes regularly accuses both foreigners — and Brazilians themselves — of talking down Latin America’s largest economy, which he says has entered a “V-shaped recovery” following the downturn caused by the pandemic.

His ministry estimates that GDP will grow by more than 5 per cent this year and 2 per cent next year — a substantially rosier outlook than most economists who are forecasting stagnation or even recession in 2022.

In the third quarter, the economy entered a recession as surging inflation damped growth.