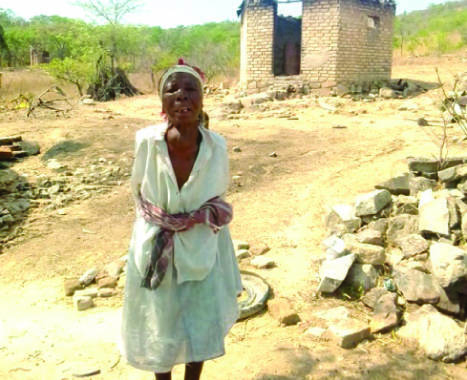 Gogo Nyikayaramba in front of the burnt hut

A Nyanga family is reportedly starving as alleged goblins are feasting on its cooked food before replacing it with soil on a daily basis.

The goblins are now tormenting Gogo Nyikayaramba and her three grandchildren.

The three juveniles doing Grades six, one and Early Child Education (ECD) have dropped out of school as a result and staring starvation in the face.

Acting Chief Saunyama confirmed the case to The Manica Post which is happening at the Nyikayaramba homestead in Ward 14 of Kute Village. He said:

I can confirm the mysterious occurrences happening at the Nyikayaramba homestead. The children who are all below the age of 11 are manifesting.

They are being tormented by goblins that take away their prepared food, and eat it before replacing it with soil.

This has been happening for some time now and has left the family living in abject poverty after two huts were recently reduced to rubbles by a mysterious fire.

The fire destroyed household property as well as clothes and foodstuffs. The origins of the fire are yet to be ascertained.

The children often fall into trances, and some of them are now staying at a local prophet’s homestead, a development that is compromising their safety.

A neighbour who requested anonymity revealed that they have informed Chief Saunyama and other relevant authorities such as the Department of Social Welfare to act on the issue. Said the neighbour:

It is a serious case. Their food disappears from their plates especially when the three juveniles and Gogo Nyikayaramba are about to eat.

This has severely traumatised the kids and their health is failing. Villagers are also perplexed.

The goblins are reportedly being unleashed by Gogo Nyikayaramba’s relatives who want to get rid of them.

Acting Chief Saunyama summoned the Nyikayaramba family to his traditional court and were set to appear before him yesterday (Friday).