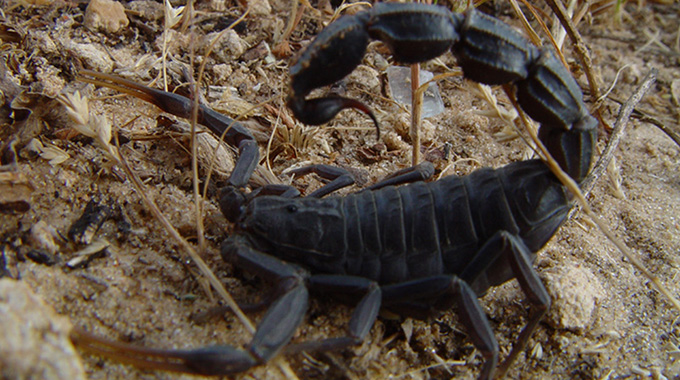 A 48-year-old woman from the Ndali area of Chiredzi died after she was stung by a black scorpion on Tuesday night, police have confirmed.

According to Masvingo Provincial Police spokesperson Inspector Kudakwashe Dhewa, Flora Munorwei of Zunguza Village was confirmed dead on arrival at St Joseph Gudu Clinic, a few hours after she had been stung by the scorpion.

Munorwei and her husband were sleeping outside their bedroom hut and the black scorpion sneaked under blankets around 9.30 PM on Tuesday and stung her.

The couple was sleeping outside their bedroom hut to relieve themselves from the prevailing high temperatures.

Munorwei was woken up after feeling pain in her left shoulder only to discover that a black scorpion had stung her.

Her condition deteriorated a few minutes after family members had woken up to kill the poisonous scorpion.

She was carried to the clinic in a wheelbarrow and passed on less than two hours later.

Police discovered a black mark on her left shoulder where she had been stung by the scorpion and her body was taken to Chiredzi General Hospital where it is awaiting post-mortem.