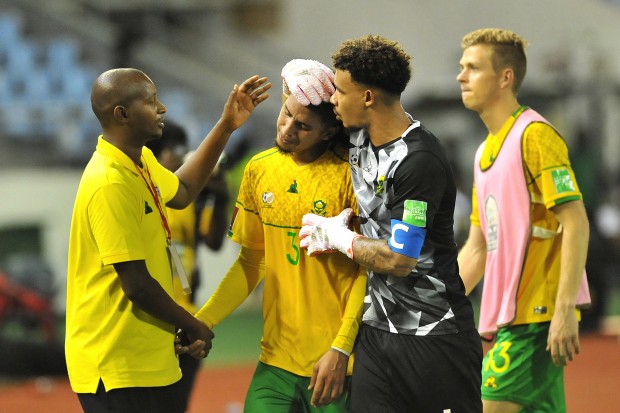 The South African Football Association (SAFA) has officially lodged a complaint after Bafana Bafana crashed out of the 2022 FIFA World Cup qualifiers under controversial circumstances in Ghana.

Bafana Bafana suffered a 1-0 defeat at the hands of Ghana, courtesy of a contentious André Ayew penalty awarded by Sengalese referee Maguette Ndiaye.

Ndiaye controversially adjudged Rushine De Reuck to have fouled Daniel Amartey in the box while defending a Ghana corner kick.

Replays of the incident suggested there was minimal contact between the two players and SAFA CEO Tebogo Motlanthe has confirmed that the incident was immediately reported to the match commissioner. Motlanthe told Kickoff.com:

Yes, I can confirm that we acted immediately by registering [a complaint] with the match commissioner last night.

The penalty issue, from where I was seated, didn’t look legit. It is sad that referees decide the games at this level.

Having seen what the team went through it is disheartening and we salute the Technical Team and the players for showing the fighting spirit despite the match officials’ conduct.