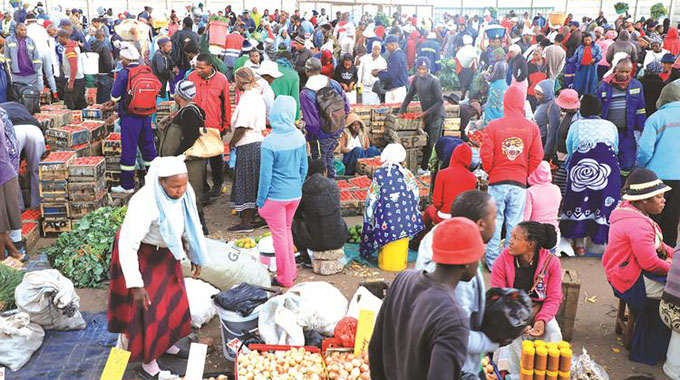 Members of the geverning ZANU PF Tuesday clashed with Vapostori over vending bays from Joshua Nkomo street to Fife Street along 5th Avenue in Bulawayo.

When the Southern eye crew arrived at the scene, there was pushing and shoving as they jostled for marked vending bays, with municipal police struggling to contain the situation that was fast blowing out of hand.

Some Zanu PF members in party regalia claimed they deserved to occupy the vending bays while members of the apostolic sect  claimed the space was reserved for them.

One of the vendors, who only identified himself as Tendai said the place was reserved for apostolic sect members. He said:

This place had been closed because of the lockdown and before that, it belonged to Vapostori.

That is why you see that there are a lot of Vapostori here.

We got here early in the morning and we were surprised that bays are now being forcibly taken by Zanu PF members. We will not allow this to happen.

Mayor Solomon Mguni condemned the clashes accusing “a section of Zanu PF youths” of taking the law into their own hands by barricading sections of 5th Avenue from Joshua Nkomo Street to Fife Street and allocating each other vending bays on a public road.

He added that Bulawayo City Council was working on a government policy to decongest the central business district and decentralise fresh produce markets to suburban areas.

Mguni said no political party had a right to allocate vending bays, insisting such a task was the responsibility of council.

Zanu PF Bulawayo provincial chairperson Obert Msindo said he was not aware of the clashes.