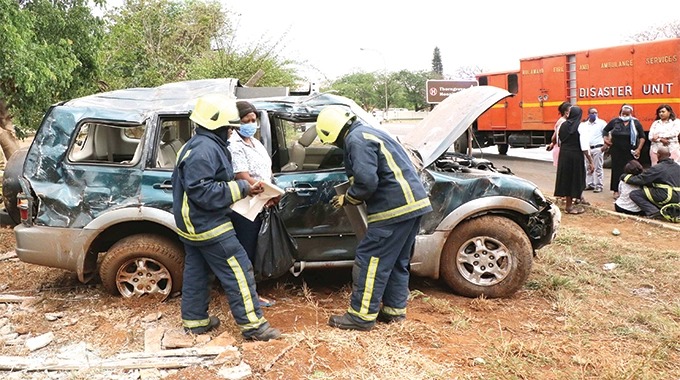 The vehicle in which Dr Muriel Fallala died after the car overturned along 12th Avenue in Bulawayo on Wednesday, 03 November 2020. Picture| Chronicle

Dr Fallala was killed in a car crash on Wednesday while driving to the city’s centre to attend to a critical patient.

She lost control of her Mitsubishi SUV near the Ascot racecourse while driving along the 12th Avenue extension.

The vehicle veered off the road, overturned and hit a precast wall at Old Miltonians Club. The incident occurred around 3 PM.

Dr Fallala was alone in the car when the accident occurred. Her body was taken to a local mortuary by police.

We are told that she was rushing to the city centre to attend to a critical patient at Galen House.

She lost control of her vehicle and it rolled and hit a precast wall. She died on the spot.

For me it’s a personal loss, I’ve known Dr Fallala for a long time. This afternoon at 1.30 PM we were together at the Royal Clinic.

She had come there to see a patient and we were talking medicine and all that little did I know that she was coming to say goodbye. I’m really devastated.

She worked tirelessly over the years to provide emergency services and deliver so many babies safely.

She was still young and strong, this is a sad day for me.

Dr Fallala was a Medical and Dental Council of Zimbabwe councillor and an administrator at Galen House.

She was the past president of the College of Primary Care Physicians Zimbabwe and was a member of the World Organization of Family Doctors.