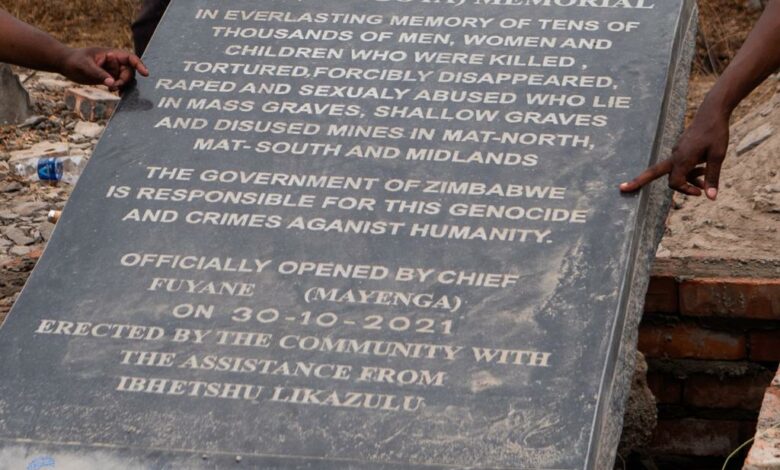 A third memorial plaque to honour the victims of Gukurahundi has been erected at Bhalagwe in Maphisa, Matabeleland South Province, after two plaques that were erected on separate occasions earlier this year were vandalised.

Bhalagwe is the Gukurahundi epicentre where thousands of mostly Ndebele-speaking Zimbabweans were murdered and reportedly thrown into the disused Antelope Mine at the height of the massacres.

Just a short distance from the mine, there is a fenced graveyard where there are two mass graves for Gukurahundi victims.

The site was also a concentration camp for the notorious North Korean trained Fifth Brigade operations in that area.

The latest plaque was erected during a memorial service which was attended by traditional leaders and the Maphisa community led by Ibhetshu LikaZulu.

Addressing the delegation, Chief Khulumani Mathema of Gwanda criticised some chiefs from the region for failing the affected communities and pushing for justice.

The traditional leader said trying to solve Gukurahundi issues through talks has failed hence people should resort to action. He said:

There are issues that need to be addressed for Gukurahundi to be solved. When the National Chiefs Council was first formulated, the intention was to allow free dialogue on the effects of the massacres.

What’s disappointing is that some Chiefs from affected areas are not participating nor are they pushing for these dialogues. They have let people who are not affected take the lead which defeats the whole purpose.

Chief Mathema added that for as long as the perpetrators do not come to the fore and admit wrongdoing, there shall be no resolution of the matter.

Chief Fuyana of Maphisa, expressed gratitude for the persistence of the community who have not given up on replacing the plaques each time they got stolen.

Chief Dakamela, who was also present at the memorial, said the constant vandalism of the plaques is a disruption of the healing process.

Reverend Ndlovu of Brethren in Christ Church highlighted that killing people would never silence them as their spirits will seek justice.