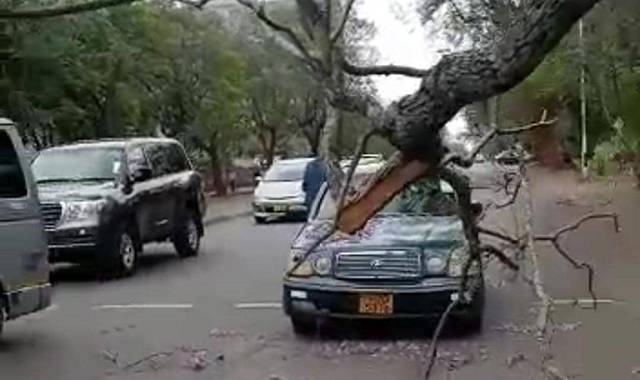 A Harare motorist escaped death by the skin of his teeth when a Jacaranda tree fell right in front of his car whilst driving along Leopold Takawira Street on Wednesday.

The motorist, Daniel Gorejena, was in the company of his friend (only identified as Danny) when the incident occurred adjacent to Harare Girls High School.

There were no casualties and no harm was brought on the car.

Gorejena told H-Metro that he only managed to stop after applying emergency breaks. He said:

I was just driving along Leopold Takawira just like any other day when the Jacaranda tree just fell in front of me.

I wasn’t speeding and lucky enough I was able to apply the emergency breaks quick enough to only reach a few light branches of the already fallen tree.

He urged the City of Harare to keep checking for such hazards to prevent loss of life and property.