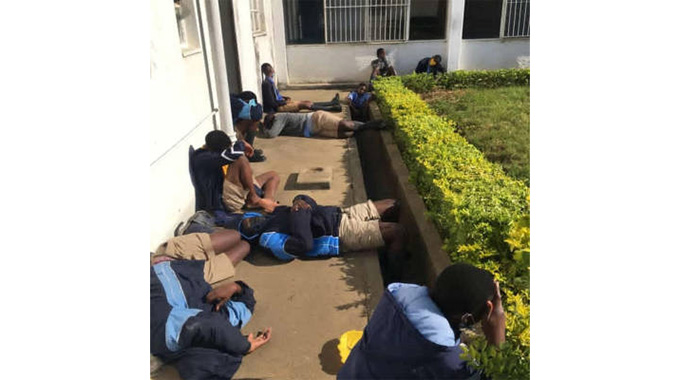 Nashville pupils appearing to be sick and lying on the ground.

Students at Nashville High School in Gweru stage-managed a COVID-19 “crisis” at the school in protest over the postponement of an exeat weekend which was scheduled for today by school authorities, it has emerged.

A voice note that went viral on social media from an alleged parent of a learner at the school claimed that students were spending most of their time sleeping in the sun, probably unaware they have COVID-19.

The parent said she was called to attend to her child, who tested COVID-19 positive and is now receiving treatment.

It has, however since emerged that the audio and pictures of schoolchildren lying in the sun were part of the stunt.

Gweru District COVID-19 Taskforce Chairperson, Joram Chimedza on Friday morning said all the 187 boarding pupils in the school tested negative for coronavirus following some rapid tests at the school. He said:

We reacted to reports of audio and pictures that went viral circulating on social media platforms last night and did the tests today.

Not even a single pupil or teacher tested positive, the situation is normal at the school and we appeal to members of the media to stop peddling falsehoods.

The pictures were actually sent by some of the pupils who were not happy after they were denied an exeat weekend. They meant to cause alarm.

He said testing was ongoing on teaching and non-teaching staff with none having tested positive so far.