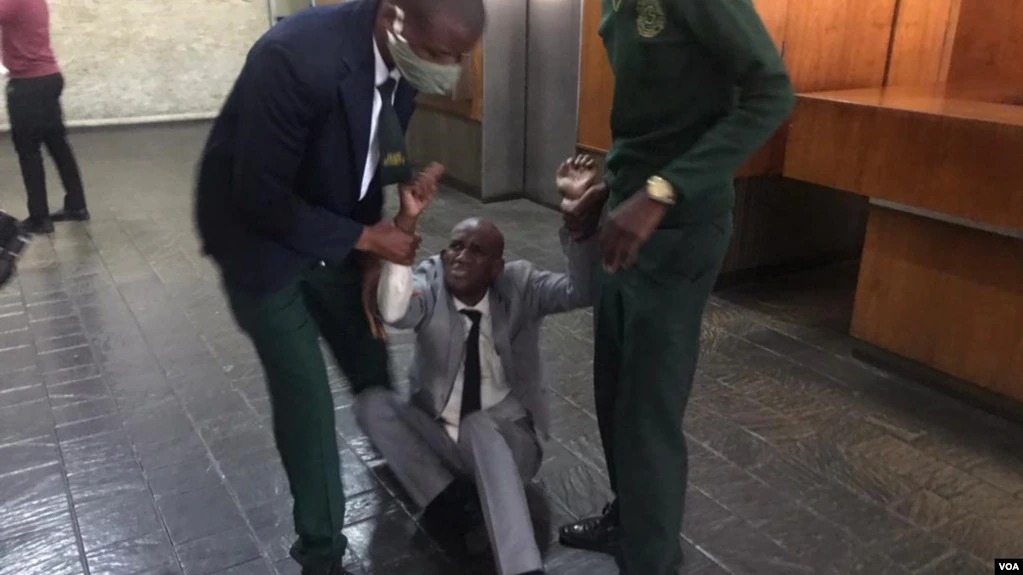 Kudzanai Mashumba being dragged out of a press conference after he was beaten up by MDC-T activists in Harare. (Photo: Thomas Chiripasi)

Thokozani Khupe’s former bodyguard was on Thursday beaten up by some youths belonging to the party led by Douglas Mwonzora when he tried to speak about alleged abuse of funds by the president of the MDC-T formation.

Kudzanai Mashumba was manhandled by MDC-T youth leader, Yvonne Musarurwa, and several others at the media centre in Harare during a press conference where he intended to expose what he alleges is mismanagement of funds by Mwonzora.

Less than a minute into his prepared statement, Mashumba was heckled and beaten up in front of reporters.

Musarurwa and the other assailants claimed that he was no longer a member of the party and therefore he had no right to talk to the press about anything related to the MDC-T.

Mwonzora is accused of misappropriating thousands of dollars belonging to the MDC-T before the party held an Extraordinary Congress last year, allegations he has strenuously denied.

The party’s information and publicity secretary, Witness Dube, claims that Mashumba is acting on behalf of the MDC Alliance led by Nelson Chamisa. Said, Dube:

Mashumba and all these people making these false claims have been sent by the MDC Alliance.

They want to denigrate the image of our president as we are preparing for a congress to choose the new leadership.

It’s nothing new as far as we are concerned because there are some like him who have made similar allegations.

We are not concerned at all about this because these are people who are looking for fame.

She was among several other candidates who were beaten to the presidency by Mwonzora in a violent Extraordinary Congress held last year.

One Comment on “Khupe’s Former Bodyguard Assaulted By Mwonzora Loyalists”