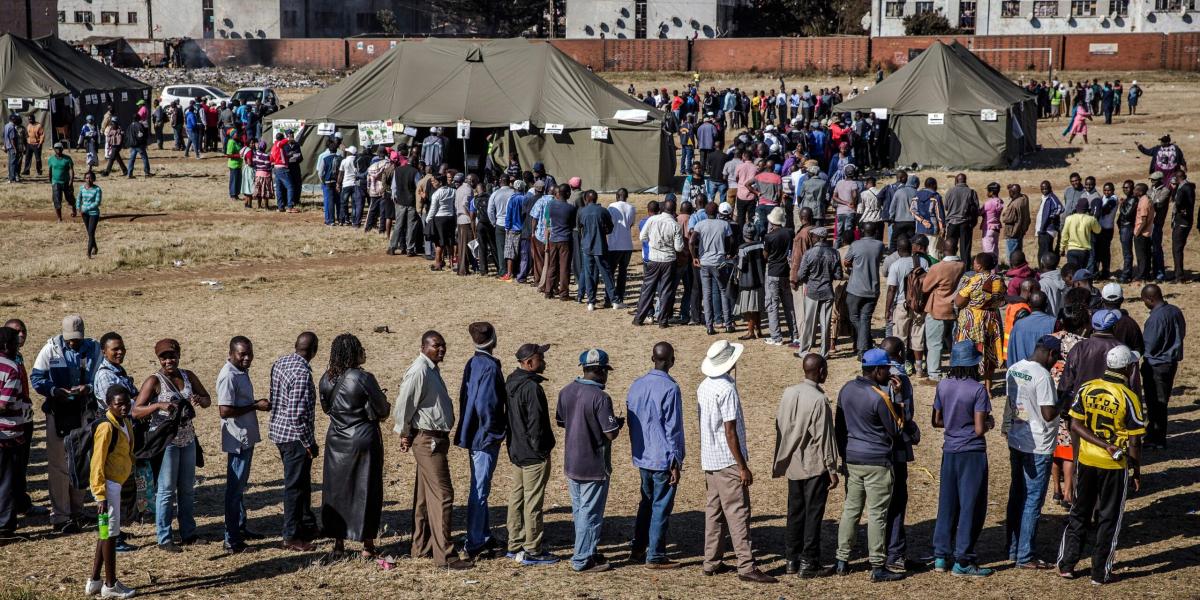 TOPSHOT – People queue in order to cast their ballot outside a polling station located in the suburb of Mbare in Zimbabwe’s capital Harare, on July 30, 2018. – Zimbabwe goes to the polls in its first election since authoritarian leader Robert Mugabe was ousted last year, with allegations mounting of voter fraud and predictions of a disputed result. (Photo by Luis TATO / AFP) (Photo credit should read LUIS TATO/AFP/Getty Images)

The Election Resource Centre (ERC) is concerned over the reports of recent incidents of politically motivated violence in Zimbabwe.

We deplore the incidence of violence at a ZANU PF Provincial Coordinating Committee meeting in Mutare at Marymount Teachers College on 9 October 2021 and attacks of the MDC Alliance convoy between 11 and 12 October 2021 which included stoning cars, barricading roads with burning logs and assaulting members of the MDC Alliance and are certain that most Zimbabweans would wish to disassociate themselves from such acts.

Acts of intimidation and inter- or intra-party-political violence should not be tolerated in a democracy, and those responsible for instigating such violence should be brought to justice.

In this regard, we call for political parties and their leaders to conduct themselves peacefully. There must be a full investigation of incidences of violence and all those found responsible must be held accountable.

The ERC also urges political parties to renounce the use of provocative language and dissemination of misinformation and falsehoods that only promote political tensions, divisiveness, and violence to promote the freeness, fairness, and openness of the political and electoral environment.

We also call on all parties to respect the democratic principles that are set out in Zimbabwe’s constitution, and which will contribute to a peaceful, just, and democratic society.

Through these principles, a broader peaceful electoral environment can be achieved contributing to a level playing field for all.

Considering the above, the Election Resource Centre, therefore, recommends the following:

To the Government of Zimbabwe:

To the Zimbabwe Electoral Commission, the Zimbabwe Human Rights Commission and all independent institutions concerned with supporting democracy and ensuring an improved political and electoral environment.

The ERC urges all independent institutions to condemn all forms of violence, support and entrench human rights and democracy as provided for in section 233 of the Constitution.

To the Citizens of Zimbabwe: The ERC encourages the citizens of the Republic of Zimbabwe to refrain from perpetrating violence and to be vigilant in reporting such acts to responsible authorities.